This week’s lesson is all about the dreaded L word – L-U-N-G-E – as in your human forcing you to trot or lope endless circles for 30 minutes straight while they continuously crack the air behind you with a lunge whip and cluck every 15 seconds. The never-ending circle of nagging.

I’ve witnessed enough clinics at the ranch and been around enough training demos at tours to tell you that nothing screams “I have control of my human” more than how you handle lunging sessions. This week’s challenge? Stop looking at lunging as a form of torture and instead as a new opportunity to demoralize your human.

When your human snaps the lunge line on your halter, drags you to the middle of the arena and begins that incessant clucking to get you moving, rather than loping off into a circle, shuffle sideways so that you’re looking straight at them. This will turn into a hilarious game where your human will run around to your hindquarters, swinging the lunge whip and clucking, in an attempt to get you moving. Meanwhile, you’ll just take a few steps sideways to turn and look right at them. Who’s lunging who now?!

At some point, the clucking will take on a fever pitch. Just ignore it. Ole Betty will start huffing and puffing and you won’t even have dropped a bead of sweat. You can literally play this game all day long … you’re like the Energizer Bunny, you can keep going and going and going … or at least until your human is red in the face and calls it quits.

Now, let’s say that your human does get you going in a circle. Just because they get you going doesn’t mean they can keep you going. How you handle this stage is personal preference. The seasoned veteran’s go-to approach is to look outside the circle and lean against the lunge line. Literally try to pull your human off their feet and drag them all around the arena.

Some of us like to add a little more flair. This is especially fun to do if you’re in a warm-up pen at a show or in a crowded area before a trail ride. Start with a good, old-fashioned whinny. Keep calling out, making your whinnies as shrill as you possibly can. While your human is busy avoiding disapproving, eye-rolling looks from their fellow comrades, turn up the heat and take off bucking and farting.

Your end goal is complete and utter mayhem. Bulldoze your way through that packed warm-up pen like Dobbins cuts through the herd when he hears the twist of a peppermint wrapper. You’ll know you’re nailing it when your human is holding on to the end of the lunge line like they’re jet skiing, scrambling to stay on their feet, and horses and humans are jumping left and right to avoid a collision. 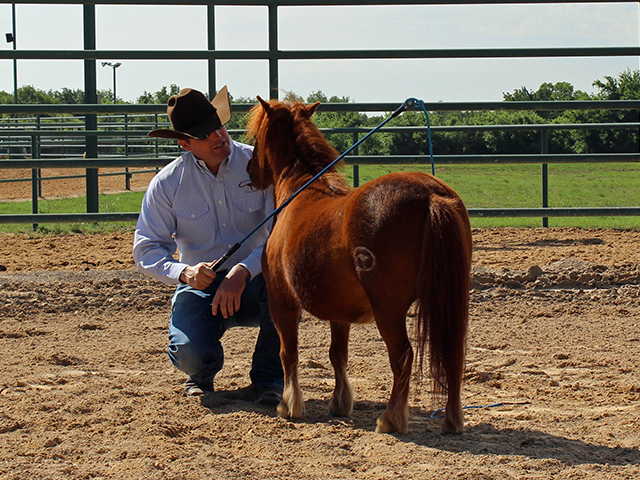 It’s all fun and games until somebody starts sweating.

If your human has learned the Fundamentals Series exercises Lunging for Respect Stage One and Stage Two, you’re toast. Armed with these groundwork exercises, rather than attempting to run you around in an endless circle for 20 minutes, your human will know that the way to get you to focus is by asking you to move your feet and change directions. They’ll have you constantly stopping, rolling back and heading off in the new direction so much so that you’ll only be able to concentrate on what they’re asking you to do. Say goodbye to play time and hello to tuning in to your human time.

You’ll see exactly what I mean in this video I got Clinton to put together.