If your horse is less than a perfect gentleman when you approach and enter his stall, it’s time for an attitude tune-up. Cranky and disrespectful behavior turns dangerous quickly because you’re trapped in a small space with a 1,000-pound animal. I’m going to cover two common problems associated with horses in stalls and share my fixes.

Before we begin, though, it’s important for me to say that you can cure almost all of your horse’s bad manners and cranky attitude by just teaching him the Fundamentals groundwork exercises. Earn his respect and show him that you’re a knowledgeable leader he can trust and you’ll find that he’ll greet you with a pleasant attitude and be respectful of you when you enter the stall.

Your horse turns his butt towards you when you walk into the stall.

One of my biggest pet peeves is having a horse turn his butt towards me when I go to catch him. It’s the equivalent to a child turning his back on his parents. I don’t care if my horse is turned out in a pasture or if I approach his stall, when he sees me coming towards him, I want his attention and eyes on me. What’s our saying? Two eyes are always better than two heels. 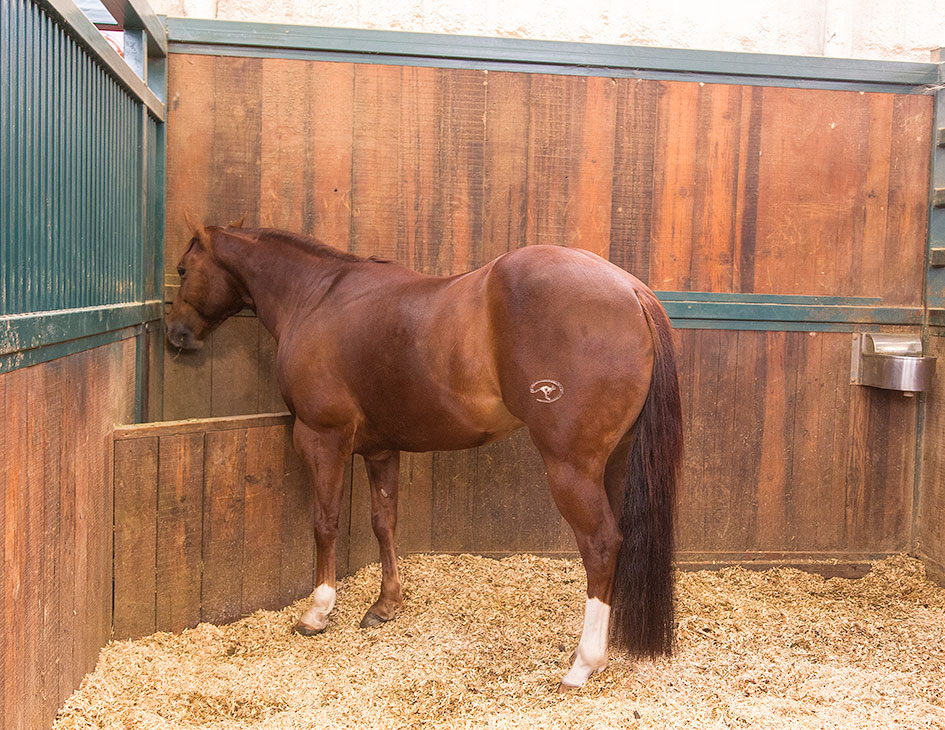 The ultimate sign of disrespect is when a horse turns his butt towards you when you enter a stall.

If your horse does turn his butt towards you when you approach the stall, you’ll apply pressure to him to make him feel uncomfortable until he turns and faces you with two eyes. A word of caution here: You have to be careful when you’re working with a horse in a stall. I don’t actually get in there with a horse too much. I usually just stand in the doorway. If you get in the stall with him, and you start applying pressure, especially if he’s disrespectful and pushy, or if he’s frightened, he might kick you. Since you’re in a tight enclosure, the chance of you getting kicked is pretty high. You have to use common sense here. 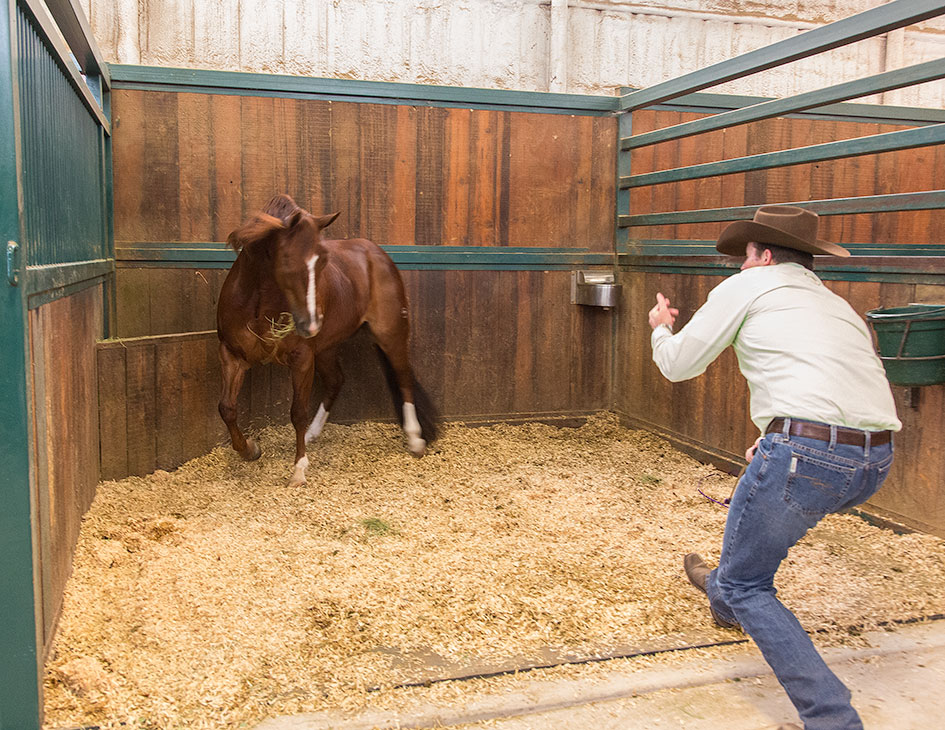 Apply pressure to the horse’s hindquarters to get him to face you with two eyes.

When I walk into a horse’s stall, I automatically want him to turn and face me and have a pleasant look on his face. If he doesn’t face me with two eyes, I apply pressure towards his hindquarters. As soon as the horse looks at me, I turn around and walk away from the horse or turn and face the other direction. Basically, I act like I’m not interested in him. 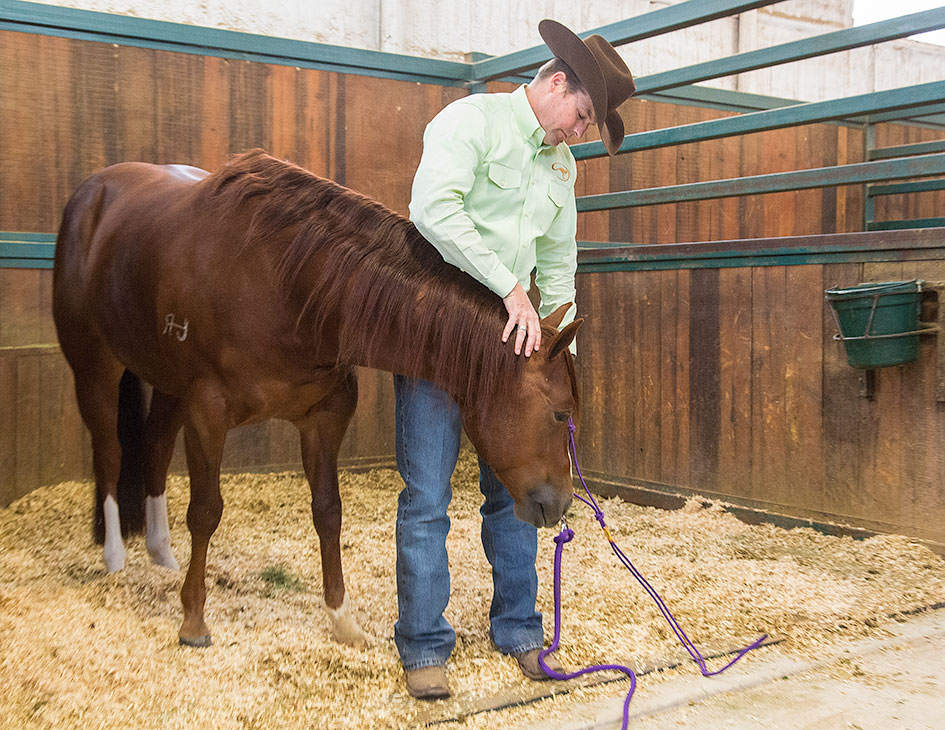 Rub the horse and put the halter on him.

With horses that are especially disrespectful and are kept in a larger stall, when they see you approaching, they’ll run to the corner, stick their heads into the corner and show you their butts. That’s when I use the stick and string rather than the lead rope, because I can create more pressure with it and stay a safe distance away from the horse. Remember, the Handy Stick is nothing more than a 4-foot extension of your arm.

I start by spanking the ground near the horse’s butt with the string. If that doesn’t cause him to look at me, then I gently, but persistently with rhythm, spank his butt. Not really hard, but enough to irritate him. In response, he might stick his head in the corner, put his head down low or even put his head over the fence, depending on the type of stall he’s in. You have to regulate the amount of pressure you put on him, so that he’s uncomfortable, but you’re not using so much pressure that he tries to jump over the fence, or he barrel kicks at you.

If the horse does kick at you, keep spanking him on the butt with rhythm. Again, how hard you spank depends on the horse’s sensitivity level. If your horse is very sensitive and frightened, gently tapping him with the stick is all that’s necessary. If he’s pretty disrespectful, pushy, dull or lazy, you might have to spank him with the stick and string a lot harder.

The secret is if you even smell that that horse is going to look at you, turn around and walk away from him. If he doesn’t look at you, go back to his hindquarters again. Keep using that method until he faces you.

You can’t stop the horse from showing you his butt, but you can make his butt feel uncomfortable. When he does give you his eyes, take the pressure away from him and make him feel comfortable.

If every single person who catches that horse does the same thing, pretty soon, it just turns into a habit for him to face whoever walks into his stall with two eyes. Horses are nothing more than creatures of habit. 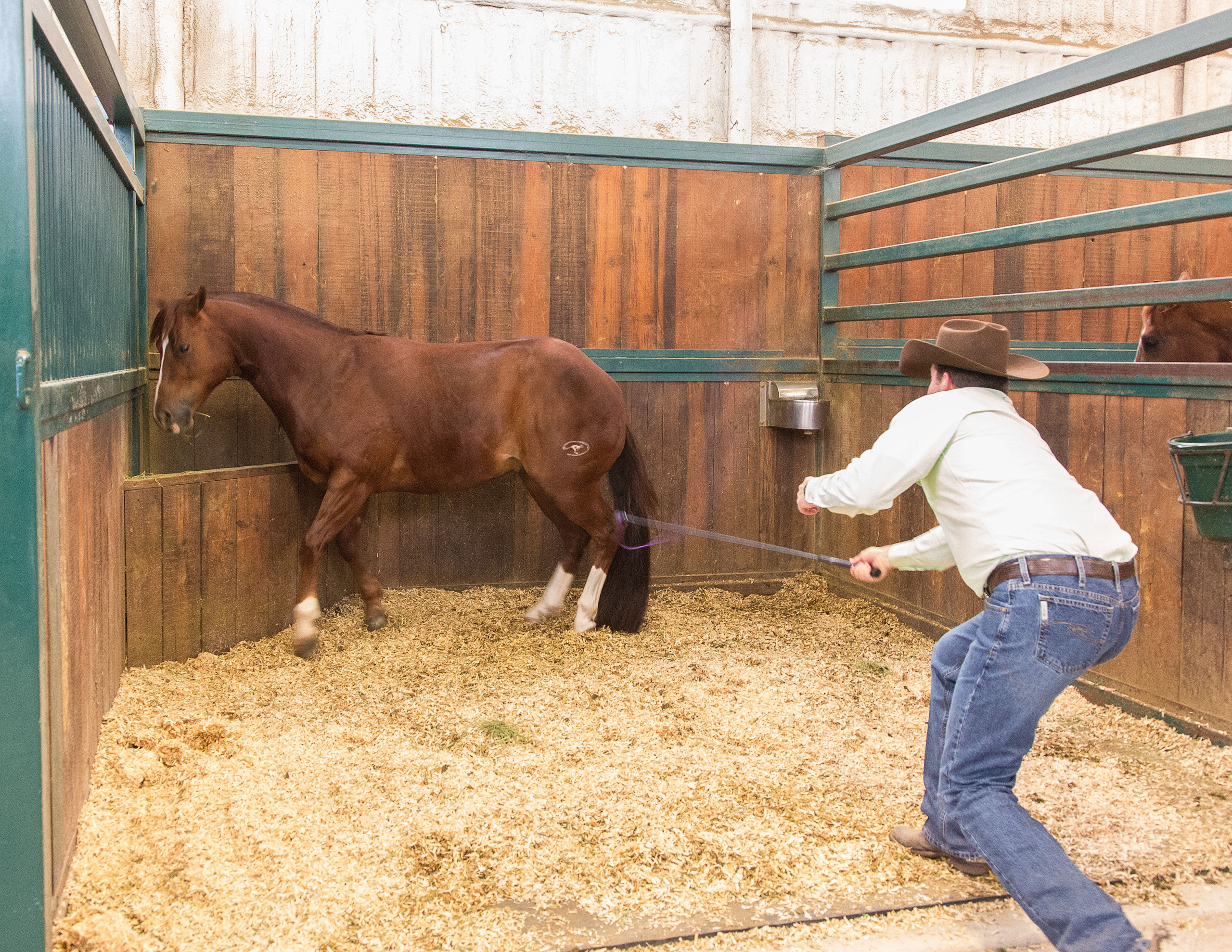 If a horse is really disrespectful, you might have to use the stick and string to spank his hindquarters until he’ll turn and face you with two eyes.

Your horse shows aggressive behavior in the stall, such as biting, kicking or striking out.

Some horses get very aggressive or defensive when they’re in stalls. They think it’s their stall. You’re going to tell your horse, “No, it’s my stall. I just happen to let you live here for free.” A lot of horses think that because it’s their stall, it’s their protected area, and they can keep you out of it. I’m going to sound like a broken record here, but again, if you teach your horse the Fundamentals and earn his respect and show him that you’re a competent leader he can trust, this type of problem will generally disappear on its own. If your horse genuinely respects you, he won’t cop an attitude or get defensive when you enter the stall.

If your horse does act defensive, aggressive or pinny-eared in his stall, do groundwork with him in the stall. Put the halter and lead rope on him and disengage his hindquarters, lunge him in the stall and send him in and out of the stall. Get in his face and make him hustle his feet.

Once you repeat that two or three times, the horse figures out that he’d better not act disrespectful or you’ll step in the stall and straighten him out. Now, when I say “straighten him out,” I didn’t say that I step into the stall and I beat him with a big stick, did I? I said I step into the stall and I move his feet with the kind of attitude that tells the horse that he’d better hustle. This fix won’t work if you walk in the stall and say, “OK, Mr. Cranky Pants, Clinton said I should move your feet because you’re so grumpy.” Your horse will stand there rolling his eyes, flicking cigarette butts at you. Get the horse’s feet to move NOW. Not when he wants to, but now. 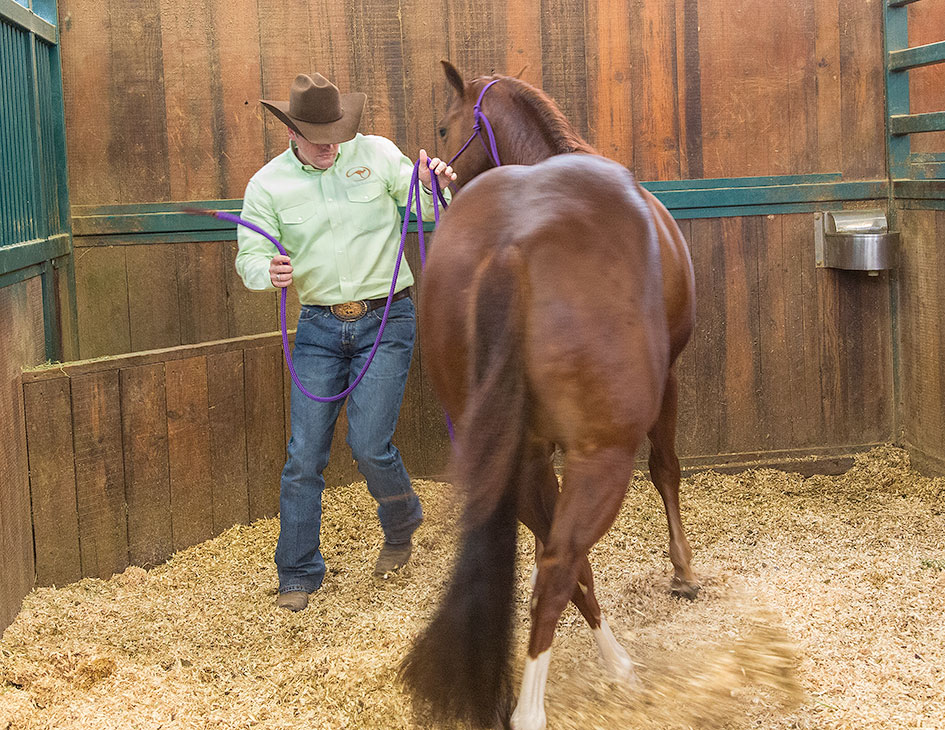 If your horse cops an attitude when you enter the stall, hustle his feet. Remind him that even though he lives in the stall, you still call the shots there.

If your horse’s behavior is so aggressive and disrespectful that you can’t even get the halter on him, then you’ve got bigger problems than worrying about his behavior in the stall. I’d immediately begin the roundpenning exercises with him and let him live in the roundpen. Treat the roundpen the same as you would the stall, and if he cops an attitude, immediately hustle his feet. In the roundpen, you’re in a much safer position because there’s more room and the horse can’t trap you in a corner. 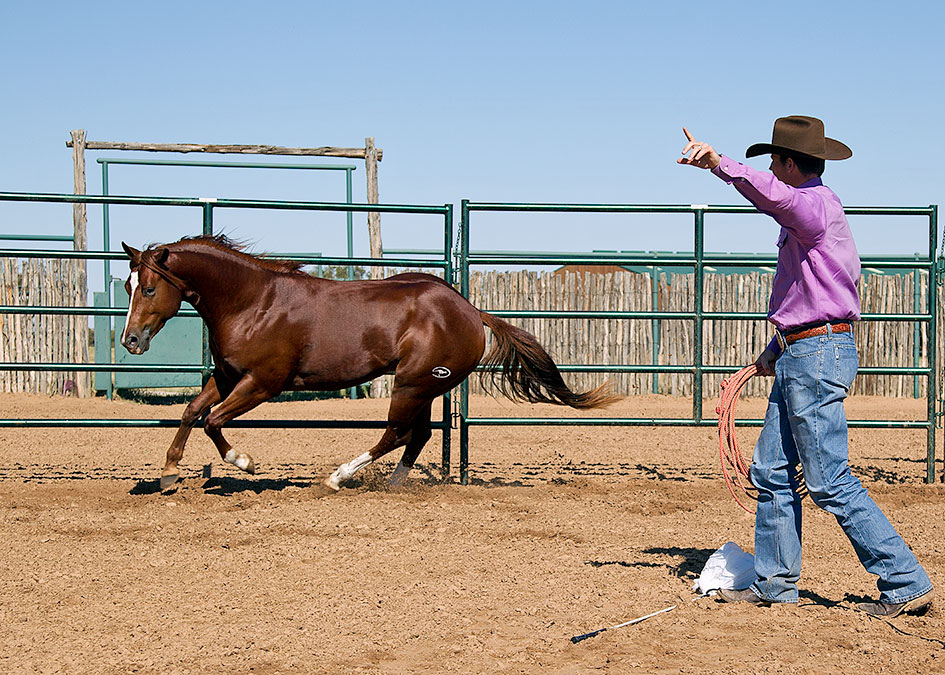 If your horse’s attitude is so horrible that you can’t even get a halter on him, do the roundpenning exercises with him.

When the horse’s attitude improves, then lead him to the stall and practice groundwork in it. When you’re sure that you have his respect, turn him loose. Then you can practice approaching the stall and haltering him. 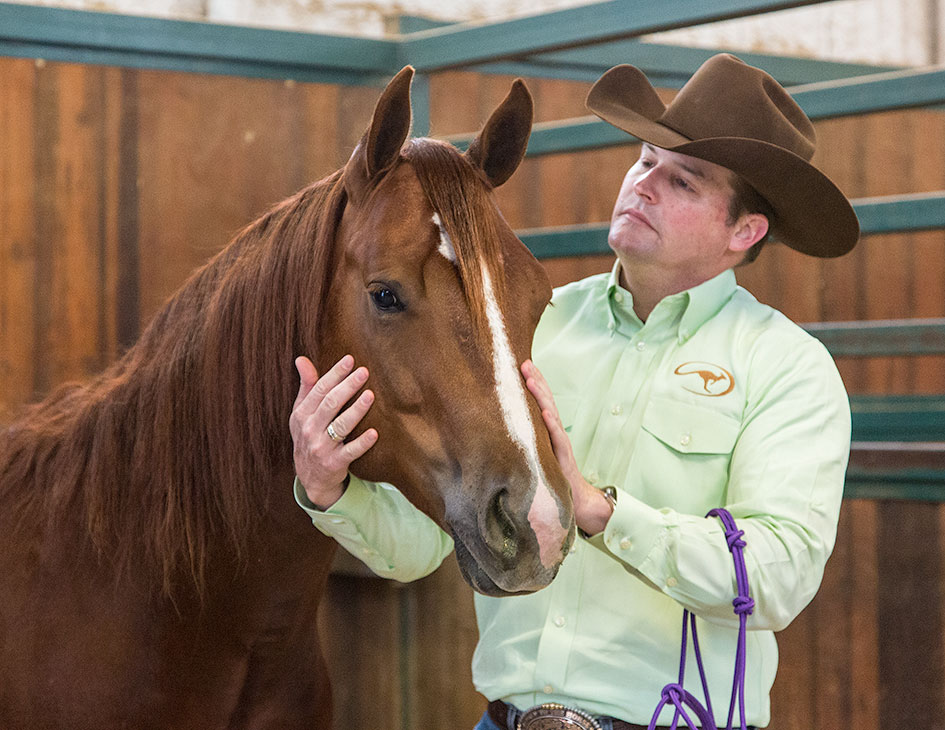 If you’re consistent about insisting your horse give you two eyes when you enter the stall, he’ll greet you with a pleasant attitude.