Teach Your Horse to Move Forward

It’s impossible to train a horse without forward movement. Having a horse that doesn’t move forward would be like if I handed you the keys to a brand new BMW with no gas pedal—other than being pretty to look at, it’d be useless to you. I like to compare the basics of training a horse to building a car. First, you have to establish a gas pedal— teaching the horse to move forward at the speed and gait you ask. Once you can move the horse forward at all three gaits—walk, trot and canter—then you establish a brake. Initially, you do this with One Rein Stops and then advance to teaching the horse to stop off pressure from both reins, and eventually off just your voice. Once you have a gas pedal and brake put into place, then you work on a cruise control button— getting the horse to maintain the gait and speed you set him at until you tell him otherwise. Lastly, you establish a steering wheel.

When you’re competing in a competition like Road to the Horse, a good gas pedal is crucial to your success. Your horse may stand quietly with his hind foot cocked while you desensitize him, but if he pitches a fit about moving forward when it comes time to ride him on the obstacle course or do the rail work, you’ll fail.

Having a horse that won’t move forward is not only frustrating, it can oftentimes turn dangerous as horses get resentful about being asked to move their feet. That’s when they kick out, run backwards and do what they can to try to escape having to move their feet.

What makes matters worse is they often get rewarded for their disrespectful behavior, because instead of pressing the issue and getting the horse’s feet to move forward, the rider will get intimidated and either let the horse go at the speed he wants or get off him and put him away for the day.

A well-trained horse moves forward off the lightest suggestion and maintains that speed and gait until you tell him otherwise. The secret to getting a good gas pedal on your horse is to keep it simple for him, meaning that when you teach your horse to move forward off your leg cue, that’s the only thing you’ll work on. Following the Method, we teach horses to move forward off our leg cue with the Fundamentals exercises One Rein Stops and the Cruising Lesson.

If your horse’s gas pedal is not working, here are a few tips to keep in mind to resolve the issue. Of course, if you are having trouble, it’s a big red flag that there’s a hole in your foundation and you need to go back to the Fundamentals groundwork and riding exercises to fix it.

When teaching horses to move forward at the gait and speed you want, use three separate cues: Squeeze, Cluck, Spank.

Squeeze Gently squeeze the middle of the horse’s ribcage with the calves of your legs to cue him to move forward. Squeezing is politely asking the horse to go forward.

Cluck If he doesn’t immediately respond by moving forward, continue to squeeze with your legs and then cluck two times with your tongue, “Cluck, cluck.” Clucking is a warning that he’s about to feel uncomfortable if he chooses not to move.

Spank If he still doesn’t respond, continue to squeeze with your legs and spank him with the end of your reins, or use a dressage whip to tap him behind your leg, until he walks forward. Spanking makes the horse feel uncomfortable for ignoring your cues.

As soon as the horse walks forward, instantly release all the pressure—stop squeezing his sides, stop clucking and stop spanking. When the horse is going forward at the speed you want, your legs should hang loosely against his sides, not applying any pressure.

In clinics, people will continue squeezing their horses’ sides and clucking to them long after the horses have moved forward. It’s a scenario that causes the horses to get dull and learn to ignore the cues because they’re doing the correct thing but getting no release of pressure. Or, instead of gradually increasing the pressure and going through Squeeze, Cluck, Spank correctly, and giving the horse a chance to respond correctly, riders will cue their horses to move forward by immediately spanking them. That results in the horses learning to move forward only off a spank. Remember, horses only get as light as the first amount of pressure you apply to them. If you want your horse to move forward off gentle pressure from the calves of your legs, then that’s how you need to first cue him. If he doesn’t respond, then you’ll increase the pressure— clucking and then spanking—until he moves forward. 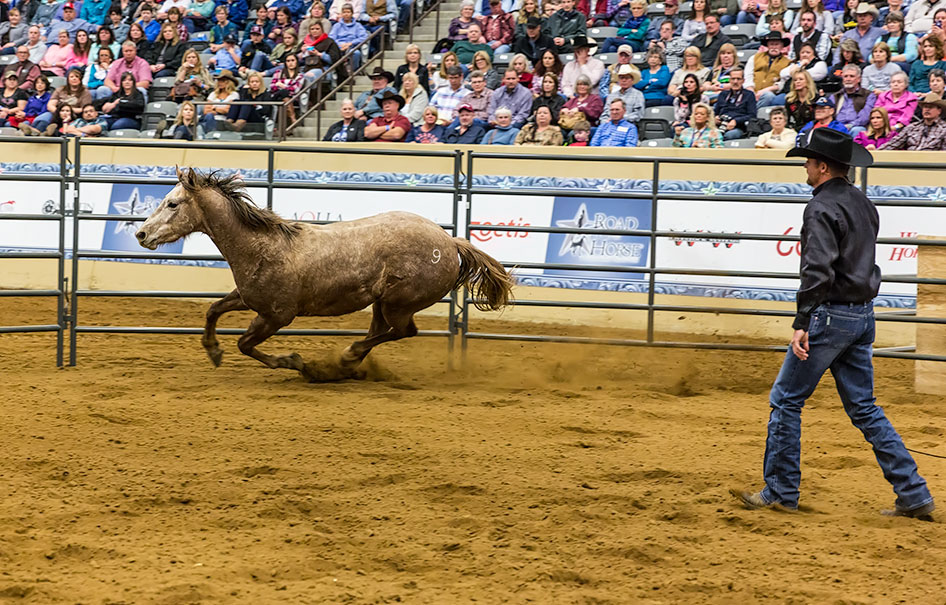 Establishing a gas pedal starts on the ground by teaching your horse to respond to and respect your cues to move his feet.

The key to teaching your horse to move forward off a light leg cue and maintain the gait you set him in is to not babysit him by taking over his responsibility. Make him responsible for his own feet. When you tell him to trot, he should keep trotting until you tell him otherwise. If you always babysit the horse and don’t make him take responsibility, he’ll never learn to do it on his own. For example, if you’re trotting the horse and he breaks gait without you asking him to and drops down to a walk, let him walk for one step and then immediately Squeeze, Cluck, Spank until he trots again. Or, if he breaks into the canter and you only asked him to trot, immediately stop him with one rein. In both examples, you’re letting the horse commit to the mistake, and then you’re making the correction. You’re basically daring him to do the wrong thing. You’ll notice that he’ll start making fewer mistakes as he learns to take responsibility for his own feet. 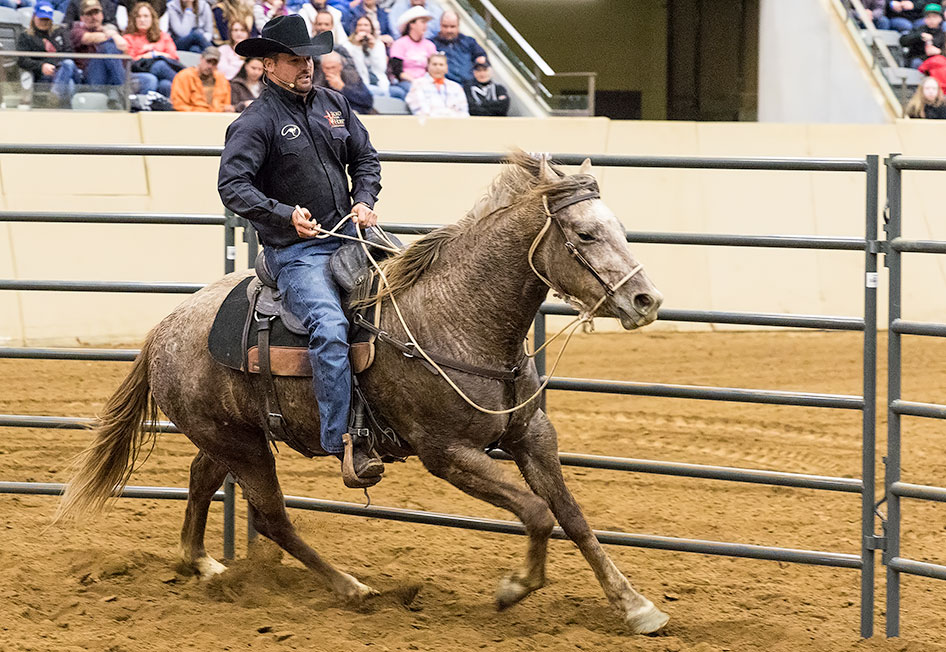 Before riding the colt outside the roundpen, I made sure I could get his feet moving at all three gaits in the roundpen.

Tip #3: Kicking is not the way to get forward movement.

Even if you have a lazy horse and you know he is going to ignore you when you gently squeeze his sides with your legs, always go through Squeeze, Cluck, Spank in order. Do not kick to get a horse to move forward. If you squeeze and he doesn’t respond within a couple of seconds, cluck. If he still doesn’t respond, then spank. If he still doesn’t respond, spank a lot harder, and keep spanking until he goes the correct speed. Eventually, the horse will understand that it is much easier to move forward when you squeeze, rather than going through the cluck and the spank and being made to feel uncomfortable.

Does that mean that you’ll probably have to go through some ugly stuff with your horse? Yes! If he’s really lazy, he may kick out when you ask him to speed his feet up. If you’re not a confident enough rider to get him through that, have a more experienced horseman do it for you. What you don’t want to do is cue the horse to canter, he ignores you, so you give him a fairy slap with the end of your reins, he kicks out, and then you pee your pants and get off him. That teaches him that kicking out gets him out of work, which is every lazy horse’s dream, and it’s a lesson he’ll pick up on fast.

The reason kicking doesn’t work is because it shortens a horse’s stride and makes him tighten up, while spanking lengthens his stride. Think about it: If kicking worked to make a horse run faster, you’d see jockeys kicking racehorses rather than using a whip. If you get in the habit of kicking the horse to go, you’ll always have to kick him, he’ll get duller and duller over time, and he’ll never learn to move forward off just a gentle squeeze. 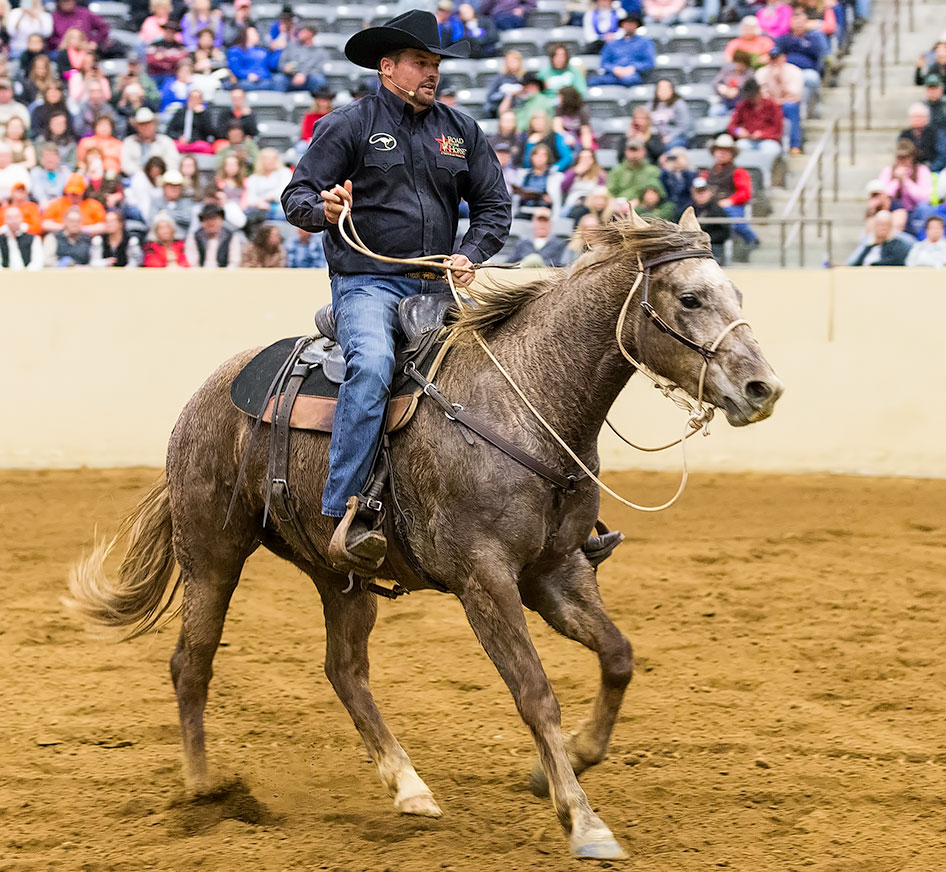 When I did take him out in the arena, he moved out freely at all three gaits.

One of the biggest culprits of why horses have sticky gas pedals is their riders giving them mixed signals. They cue their horse to walk forward, but at the same time, they have a death grip on the reins, pulling his lips back to his chest. The horse has no idea what he’s supposed to be doing. On one hand, he’s being told to go forward, and on the other he’s being told to stop or back up. That’s why, when first teaching a human or a horse how to establish a gas pedal, I make everyone ride on a big, loose rein. In fact, I have riders put one hand on the reins and then place their other hand on their horse’s mane or on the saddle horn to keep them from grabbing onto the reins and micromanaging their horses. It sounds like a simple concept, but you would be surprised how hard people find it to let go of the reins after years of riding that way.

Forward Motion is Established on the Ground

Although it may seem odd, your horse’s gas pedal is established on the ground, beginning with the roundpen exercises. When I teach Fundamentals Clinics at the ranch, we begin by working with every participant and their horse in the roundpen. I can tell by the way the horses react in the roundpen which ones have a good gas pedal under saddle and which ones don’t. The horses that move off as soon as their owners cue them by pointing their fingers in the air move out well under saddle. The ones that lazily flick a cigarette butt at their owners have the same attitude when it comes to riding. That’s why we get that behavior sorted out and corrected on the ground before we even get in the saddle.

Even if you think your horse has a good gas pedal on the ground—he moves forward when you cue him—you should test him every once in a while to be sure there isn’t any stickiness in his feet. For example, if you’re working on Lunging for Respect, when your horse is cantering around the circle, point up in the air and ask him to speed up. A horse with a good gas pedal picks up his pace while a horse with a sticky gas pedal will flatten his ears and kick out. Horses get good at fooling us and put in just as much effort as necessary to keep us happy, but when you start testing your horse, you might be surprised by what you find.