The first time you hear a horseman mention “slobber straps,” you’ll likely be left scratching your head, imagining some sort of contraption meant for horses’ slobber. While they may have an odd name, slobber straps’ purpose is a simple one – they are pieces of leather that attach reins to the bit and act as a hinge of sorts. Because of their weight, slobber straps give the horse a pre-signal when the rider picks up on the reins that contact is about to be made with the bit. In the same way, when the rider drops the reins and releases pressure, the horse feels it instantly. This is important because horses learn from the release of pressure, not pressure itself. The quicker they feel a release of pressure when they respond correctly, the faster they pick up on lessons.

That’s why Clinton recommends horsemen who are learning the Method work their horses in a bridle with mecate reins using slobber straps. Together, the mecate reins and slobber straps add weight and a better feel to the bit, which in turn allows for a connection and clear communication with the horse. They’re especially useful for training young horses or when focusing on softening exercises, because they allow the horse to realize a change or transition is coming and instantly get rewarded for responding correctly. 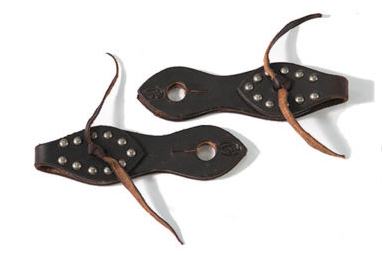 Learn about the slobber straps Downunder Horsemanship offers on our e-store.

Learn How to Put Your Mecate Bridle Together