Blanketing a horse can be a struggle because blankets are objects that move and make a noise, which makes them very scary to horses. A horse classifies any object he’s not familiar with, especially if it moves and makes a noise, as dangerous and potentially life-threatening. A horse would always rather run away from anything that frightens him instead of hanging around and fighting it. But if he can’t run away from danger, the only way he can survive is to fight. He’ll kick, bite, strike or do whatever he can to get away from the danger, but his first form of defense is to run.

Whenever you desensitize your horse to an object, you’ll always use the Approach and Retreat Method. You build the horse’s confidence by approaching him with the object that scares him (in this case the blanket) and then retreating (taking the blanket away) when he stands still and relaxes.

The number one rule to remember when using the Approach and Retreat Method is to not take the object away from the horse until he stands still and he shows a sign of relaxing. A sign of relaxing can be one of five things: 1) licks his lips, 2) blinks his eyes, 3) takes a big breath, 4) cocks a hind leg or 5) lowers his head and neck.

If you do take the object away from the horse while he is moving and using the reactive side of his brain, you’ll teach him the opposite of what you want. Instead of him standing still and relaxed while you put the blanket on him, he’ll think the answer to getting away from the scary object is to run. Using the Approach and Retreat Method, you’ll teach the horse that if he stands still and relaxes, he has nothing to worry about. Remember, horses are a flight or fight animal. You have to constantly reinforce to the horse that the answer is not to run from danger, but to stand still and relax. You want him to think that the only way he can feel safe is to stand still and relax.

As a horse owner, your job is to teach your horse to use the thinking side of his brain and desensitize him to as many objects that move and make a noise as possible—and blankets are a perfect example.

Stage One: Desensitize the Horse to the Blanket 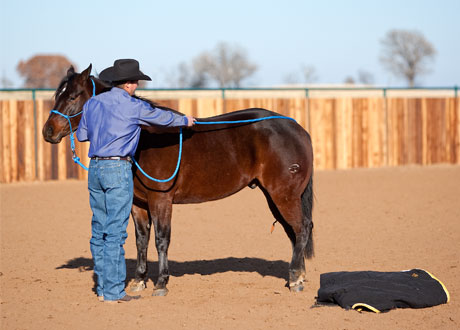 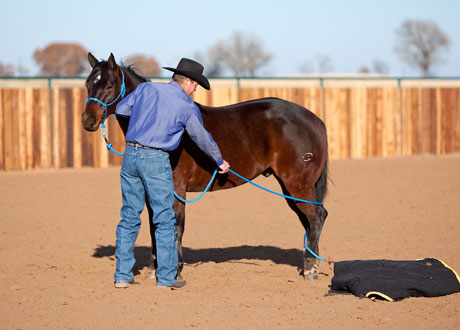 1. Before you approach your horse with the blanket, spend some time desensitizing him to the lead rope, checking that he’s confident about the rope moving around his body and legs. If he’s ready for you to introduce the blanket to him, he should stand still and fall asleep when you throw the rope at him. 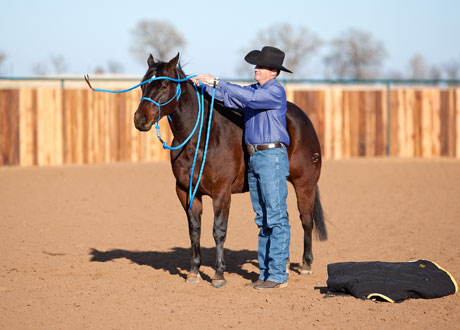 2. Since you may have to loop the blanket over the horse’s head, depending on the style of blanket you have, it’s also a good idea to double-check that he’s OK with objects moving around his face. You can use the Fundamentals Head Shy Exercises for this. 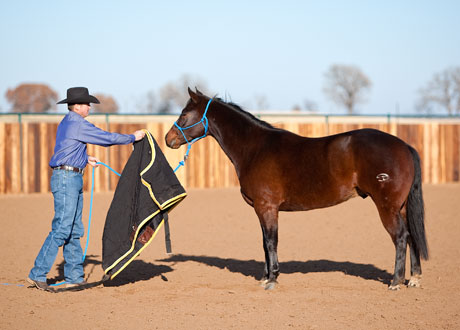 3. Standing at a 45-degree angle to the horse, use the Approach and Retreat Method to bring the blanket up to his nose. Let him smell and inspect it, and then take it away. Repeat that process until the horse remains standing still and relaxed. Most horses are naturally curious and will be interested in the blanket. Your horse may even lip it. Let him. It’s important to allow him to perform his own safety check of the object. If he’s not confident that the blanket isn’t going to hurt him, he won’t allow you to put it on him. You’ll know he’s done investigating it when he’s no longer interested in it. 4. The “retreat” part of this training method is important. The more you retreat, the more you’ll build the horse’s curiosity in the blanket. 5. Rub the blanket over the horse’s body, starting with his topline: 1) withers and back, 2) hindquarters and 3) neck. Approach and retreat each area with the blanket until the horse remains standing still and relaxed each time you bring the blanket towards him. Remember to keep the horse’s head tipped towards you. 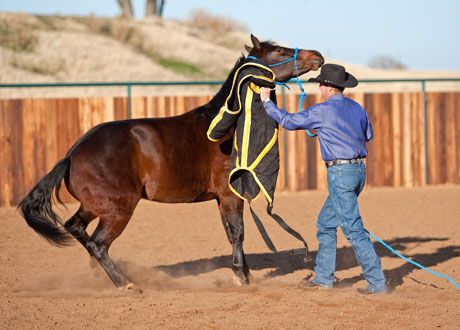 6. If the horse does move away from you, follow him wherever he goes, using the lead rope to keep his head and neck tipped toward you. It’s important to keep rubbing his topline with the blanket if his feet are moving so that he can’t escape the blanket. Follow him wherever he goes. When he stands still and relaxes, then retreat and stop rubbing him. 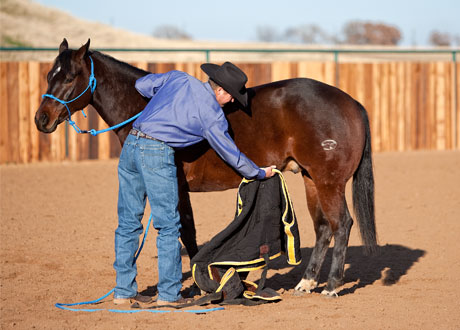 7. Progress to rubbing the blanket down the horse’s side, under his belly and down the top half of his legs. Keep the horse’s head tipped towards you the entire time. Some horses will get defensive and kick out at the blanket, but if you’ve done your homework and thoroughly prepared the horse for your tools touching his legs, he shouldn’t. If he does kick out, ignore him and keep rubbing him with the blanket until he stands still and relaxes. Prove to him that the only way the blanket will go away is if he stands still and relaxes. Eventually, he’ll realize the blanket isn’t hurting him and he’ll stop kicking. 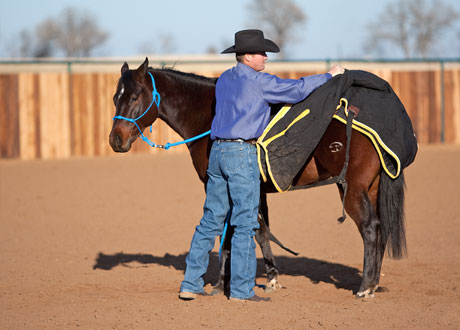 8. Keep in mind that some horses won’t show you one of the five signs of relaxing, but if the horse stands still for 15 seconds, it’s OK to retreat. At that point, he’s telling you that he is not interested in running. He may be a little scared of the blanket, but at least he’s not running away from it. 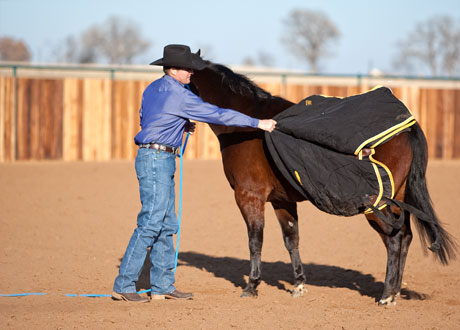 9. Still standing at a 45-degree angle to the horse, flap the blanket on the horse, starting with his topline and then progressing down his side, under his belly, down his legs, etc. Flapping the blanket makes it even scarier to the horse because the sensation will feel different and the blanket will make a noise when it hits his body. When he stands still and relaxes, then retreat and rub him with the blanket. 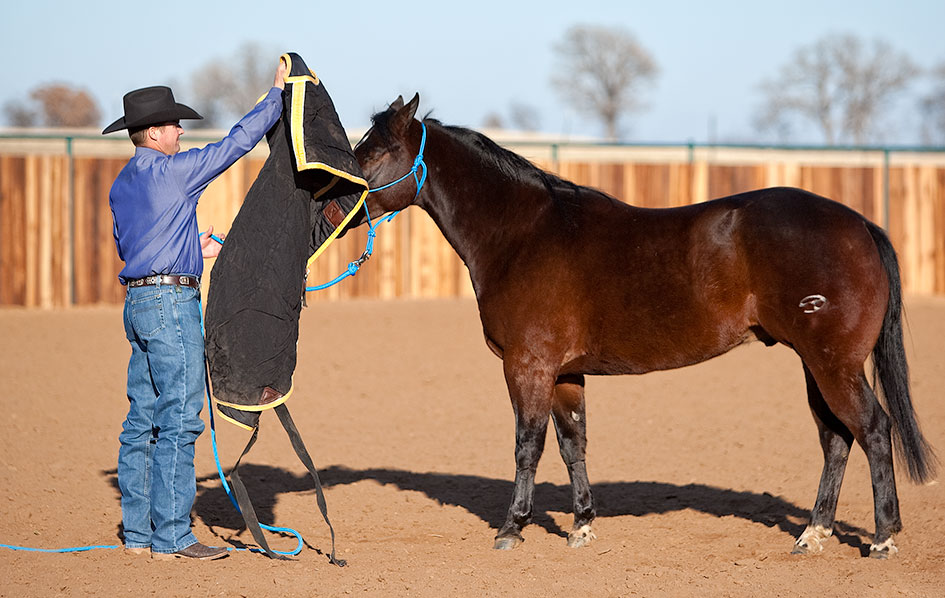 A lot of horses don’t like seeing something move up and down next to their face. If your horse is really frightened of the blanket, you may have to start desensitizing the airspace around his head 3 feet away from him instead of right next to him. 2. Then rub the horse’s face with the blanket. Start by rubbing the blanket behind his ears and then work your way down his face to his nose. Don’t immediately try to rub the blanket between the horse’s eyes because you’ll frighten him and make him defensive. It’s likely the horse will throw his head up in the air when you first begin rubbing him. If he does, as best you can, keep rubbing his face. Just like when you were desensitizing his body, you don’t want him to think he can escape the blanket by throwing his head up or moving his feet. If he continues to raise his head, you can use your free hand to hold onto the cheekpiece of the halter to discourage him from lifting his head too high. Holding onto the halter will also stop him from swinging his head away from you. Do not try to force the horse to hold his head down, though, because that will only make him want to resist you more. You’re just trying to stop him from turning his head away from you or knocking his head into you. Desensitize your horse to the blanket when he wants to stand still—after you have worked him and he’s using the thinking side of his brain. Don’t take a horse that has been in a stall for a couple of days and is full of beans and try to desensitize him to the blanket. He’ll run around and not want any part of standing still. Set yourself up for success and desensitize your horse when he’s tired and wanting to stand still. If you just do desensitizing without having the horse’s respect and attention from groundwork, all the information you give him won’t last. It’ll go in one ear and out the other. The secret is to desensitize a horse between groundwork exercises. That way, he looks forward to being desensitized because he gets to air up and relax.

Stage Three: Putting the Blanket On 1. When the horse is comfortable with the blanket going over his head, drape the rest of the blanket over his body. Practice taking the blanket on and off until he remains standing still and relaxed. 2. Using Approach and Retreat, practice bringing the belly and leg straps of the blanket up next to the horse and holding them in position for a few seconds so he can get used to the feel of them against his body. Then retreat when he stands still and relaxes. Repeat the process until you can eventually fasten the straps. A word of caution: Do not buckle the straps until you’re certain the horse is comfortable with them on his body. If you fasten them too soon and he feels them rub under his belly or next to his legs, he could react and put you and him in a dangerous situation. Remember, always set the horse up for success by thoroughly preparing him for an experience.

The biggest mistake you can make.

The biggest mistake people make is sneaking the blanket up on the horse. If you reach the blanket up towards the horse and he has a heart attack, repeat the same motion another hundred times. When he relaxes, retreat and rub him. Then do it again. A lot of people mean well, but they end up doing it all wrong. They sneak the blanket up to the horse, and he gets scared and tries to move. So the person tries to stop him from moving by shortening up on the lead shank. The more they try to stop the horse from moving, the more trapped and claustrophobic he feels, which makes him want to resist the blanket even more. That’s actually the complete opposite of what you want to have happen. If the horse wants to move, keep moving the scary object and keep his head tipped towards you. When his feet stop moving and he relaxes, that’s when you retreat and take the scary object away. A lot of people take the scary object away when the horse moves. Only take the blanket away when he stands still and relaxes.