A Rearing HORSE is Dangerous

Rearing is a very dangerous situation for both horse and rider, and if left uncorrected is a problem that only gets worse. The key to understanding how to fix your horse’s problem is to first understand that it’s just a symptom of a cause. A horse doesn’t rear for the fun of it; he rears because he falls into one of two categories:

1) He’s hot and nervous, wants to run and is using the reactive side of his brain. To make matters worse, his rider holds onto the reins with both hands, trying to force the horse to slow down and relax. However, since the horse is a prey animal, the more you say, “Don’t go!’ and try to stop him by pulling back on the reins, the more trapped and claustrophobic he feels. In his mind, the only way he can escape is by going up in the air.

2) He’s disrespectful and has sticky feet. When he doesn’t want to do something, his way of getting out of it is to run backwards or rear up. 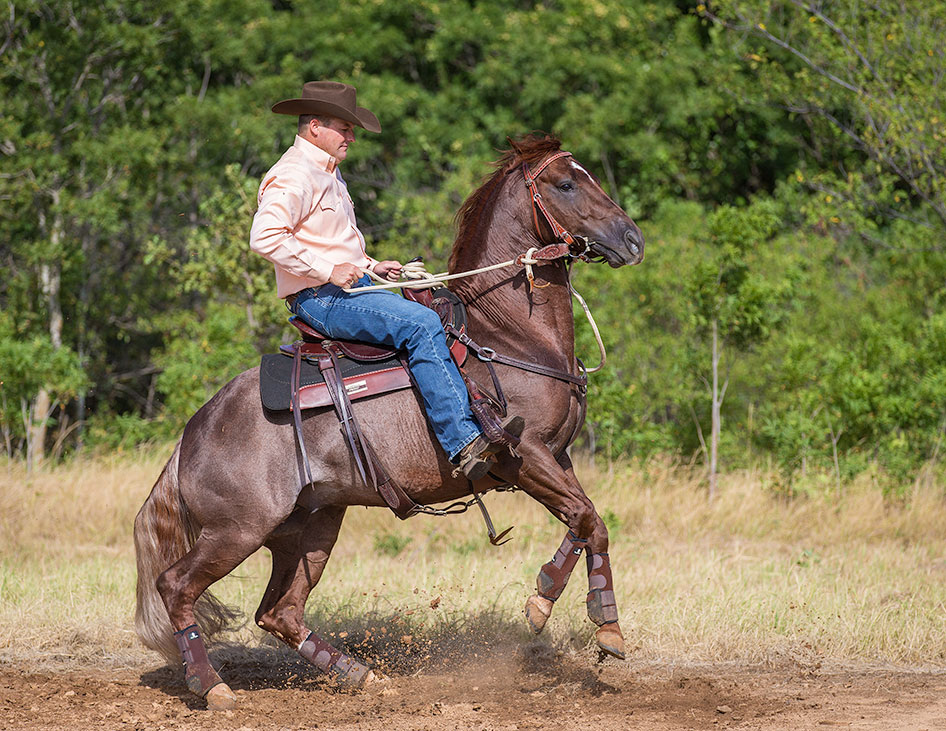 Rearing is dangerous behavior that can quickly escalate into a serious wreck.

Gain Respect On the Ground

Whatever the cause of rearing, it’s a clear sign of disrespect. To gain a horse’s respect, you have to move his feet forwards, backwards, left and right and reward the slightest try. If your horse is rearing, he’s telling you that you don’t truly have his respect. You need to spend more time working with him on the ground, establishing yourself as the leader. The Fundamentals level of the Method contains over 13 groundwork exercises you can use to gain your horse’s respect and get him to use the thinking side of his brain, all of which makes him a willing partner. After working with hundreds of horses over the years, I’ve found that a week or two of consistent groundwork usually cures rearing before you get back in the saddle. Why? Because the horse’s respect is earned on the ground by moving his feet, he’s using the thinking side of his brain and he is no longer fearful. We see this all the time with the Academy Training Horses. An owner will send us a horse that has a chronic rearing habit, has hurt multiple people and is basically unrideable. When we get the horse, we do nothing but groundwork with him for a solid week. By the time we go to ride him, his rearing problem has disappeared because it’s a symptom of a cause. In most cases, that cause is disrespect. The funny thing is, when we call the owner to give them an update on their horse’s progress and we tell them that we started riding the horse, their first question is, “Well, did he rear?’ When we tell them that he didn’t, they actually act disappointed, as if they’re not getting their full money’s worth if the horse didn’t rear with us. But it just goes to show that groundwork ensures a safe first ride. 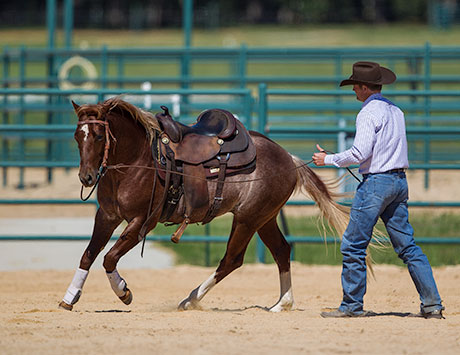 Whether a horse is rearing out of fear or a lack of respect, the best cure is to teach him the Fundamentals groundwork exercises. 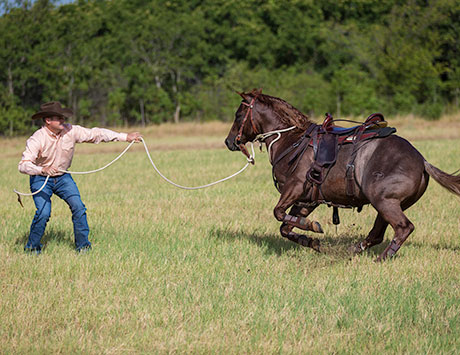 If you’re not confident enough to handle the situation from the saddle, dismount and work with your horse on the ground. Hustle his feet!

Safely Hande the Situation Under Saddle

If your horse is rearing because he’s hot and nervous, make sure you’re not adding to the situation by pulling back on both reins to try to stop him from moving. Remember, the more you pull back on the reins and say, “Don’t go!’ the more upset and nervous the horse will get. When a horse panics and uses the reactive side of his brain, use only one rein to control him, and concentrate on getting him to use the thinking side of his brain by doing lots of changes of direction.

Get Back in Control

The best way to gain immediate control of the situation is to yield his hindquarters. When a horse crosses his back legs over one another, it takes away his balance. Without balance, the horse can’t stand on his hind legs and rear. Think of yielding the horse’s hindquarters like pushing the clutch in on a car— you’re taking the power away from the horse. Yielding the hindquarters also gets the horse to stop thinking about being disrespectful or fearful and makes him concentrate on where he’s placing his feet.

Get Those Feet Moving

When a horse rears because he has sticky feet and doesn’t want to go forward, it’s a lack of control on the rider’s part and a big-time respect problem from the horse. When you tell your horse to move, he needs to move NOW! Get that point drilled into him. You first need to get control of the horse on the ground and then practice basic impulsion exercises like the Cruising Lesson to teach the horse to respond to your cues and to be responsible for maintaining the gait you set him in. When you gently squeeze his sides with the calves of your legs, he should immediately move forward. 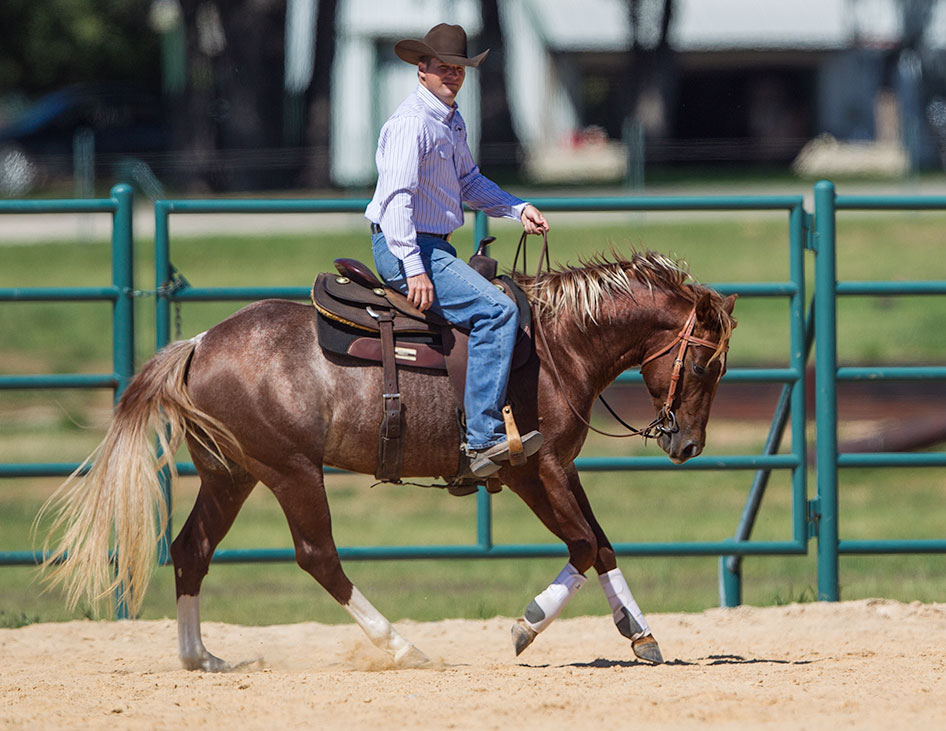 A horse that rears because he doesn’t want to move forward needs to spend more time practicing the Cruising Lesson in the arena.

Do the Opposite of What He Wants to Do

If your horse is rearing because he doesn’t want to go somewhere, use a little reverse psychology on him. Don’t think, “How can I make the horse move?’ Think, “How can I make it uncomfortable for him not to go in the direction that I want?’ You’ll do that by working the horse hard wherever he wants to be and letting him rest and relax where he doesn’t want to be. If the horse tries to rear up when you go to ride him away from the barn or other horses, work him hard at the barn or by the other horses. Using one rein at a time to direct him, hustle his feet. You can do a lot of serpentines by bending the horse with your left hand and left leg, and then going the opposite way, using your right hand and right leg. Rollbacks—loping the horse off, bringing him to a stop and rolling him over his hocks to change directions—are also a great exercise in this situation. But in reality, it doesn’t matter how you move the horse as long as you hustle his feet and are constantly changing directions. The more times a horse changes directions, the more he has to think and pay attention to you.

Plain and simple, a horse that constantly rears is a horse with a lack of foundation. You need to establish better basics and prove to your horse that you’re a capable leader. You can do that by working on fundamental groundwork and riding exercises. Once you get your horse using the thinking side of his brain and earn his respect, you’ll find that the problem will fix itself.

When a horse rears up, even though it can be frightening and could even catch you off balance, resist the temptation to hold tight on the reins. The only time I have ever seen horses fall over backwards when they rear is when the rider actually pulls them over backwards. So when the horse rears, lean a little bit forward in the saddle and grab some mane, if you have to, in order to help balance yourself. Then, as soon as all four of the horse’s feet hit the ground again, put him straight to work. 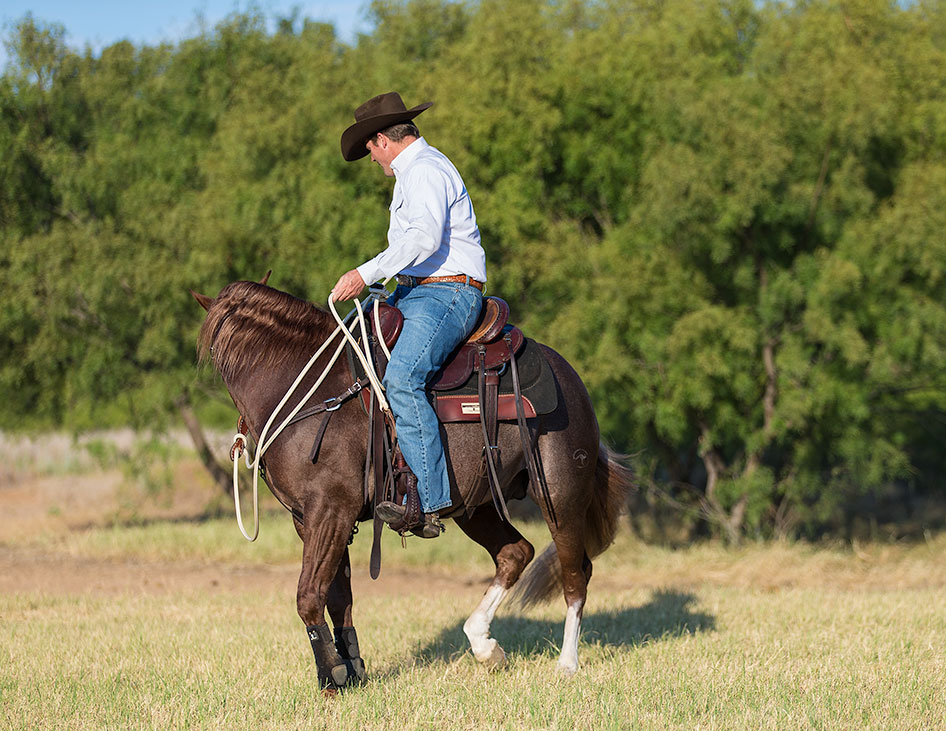 When you yield a horse’s hindquarters, you’re taking away his balance and the ability for him to stand on his hind legs and rear.