A horse that lies down on the trail lacks respect. Plain and simple.

A horse that lies down and rolls while you’re working with him is very dangerous, because if you’re not quick enough to get out of the saddle, he can crush you and seriously injure you. It’s common during trail rides for horses to lie down because they get hot and sweaty and want to roll in the sand to itch themselves and cool down. Or, you’ll be guiding your horse through a water crossing and he’ll decide to take a quick dunk in the water to cool off.

No matter the reason behind why your horse rolls, immediately make him feel uncomfortable for doing it. The instant he buckles his legs and you realize he’s going to lie down, immediately start spanking him between his ears with the end of your mecate or dressage whip. Make him feel uncomfortable NOW! Don’t stop spanking him until he’s standing on all four feet. When he gets to his feet, then spank his hindquarters from side to side with your mecate or dressage whip to get him moving forward.

Hold one hand on the horn, if you need to, in order to stay balanced as you do it. I would keep spanking the horse into a gallop (if your environment enables you to). Really make him sorry for attempting to lie down by putting his feet to work in a big way.

Then put him on a loose rein and dare him to make the mistake again. Don’t babysit him and try to keep him from committing the mistake. If you know your horse has a habit of wanting to roll or you can tell he’s thinking about it, hold the spanker in the middle of your chest or throw it over one of your shoulders. That way it’s within easy reach, but you’re not holding it out to the side as if to threaten the horse.

If the horse does go all the way down, kick your feet out of the stirrups and get out of the saddle as quickly as you can, and then immediately start spanking him. I want you to get after him like a crazy person on crack. Keep spanking him until he jumps up, and continue spanking him to get his feet hustling around you in a circle. Do a few minutes of Lunging for Respect Stage Two. Make it clear to him: There is a consequence for his actions. Then get back in the saddle and dare him to roll again.

If you’re thinking I’m making a big deal out of the horse lying down, you’re right—I am, and for good reason. Let’s get something straight: You’ve got a 1,000-pound animal dropping down to the ground and rolling. If you don’t react quickly enough or if your foot gets stuck in a stirrup, he can crush you to death. This is not a matter to take lightly. It’s deadly serious.

The biggest mistake people make with horses that roll is to let the horse think it’s OK. For example, they’ll be riding the horse and he’ll be feeling hot and sweaty and will drop to the ground and roll. Rather than making him feel wrong for rolling, people step back and let him roll all he wants and then patiently wait for him to get to his feet. So in the horse’s mind, he thinks it’s OK to drop to the ground anytime he feels like it. Teach your horse that rolling is unacceptable by making the right thing easy and the wrong thing difficult. 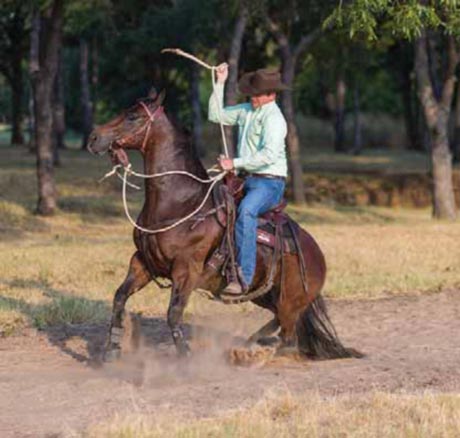 The instant you feel your horse buckle his legs to lie down, immediately make him feel uncomfortable. 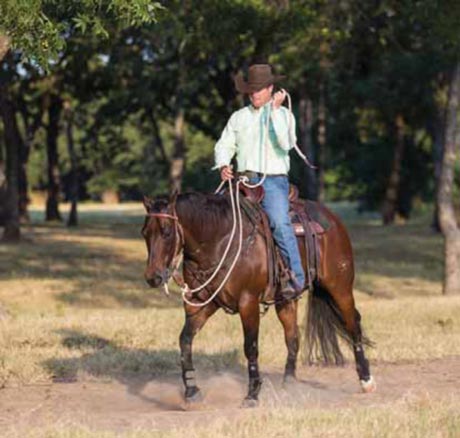 If you suspect your horse is thinking about lying down, get ready. Throw your spanker over your shoulder so it’s easy to get to should you have to use it.

The best way to stay safe with a horse that has a tendency to roll is to know what to look for. When a horse is thinking about rolling, he’ll start lowering his head to the ground and sniffing the dirt. I don’t correct him at this point. Remember, I want him to commit to the mistake. Just because you’re standing outside the bank with a gun doesn’t mean I can arrest you for holding the place up. But I am going to keep a careful eye on you. Same goes with your horse. At this point, it’d be a good idea to get your spanker ready to use. Hold it in the middle of your chest or throw it over one of your shoulders. You want to keep the spanker hidden so you don’t tip the horse off that you’re smelling a rat.

Usually, the horse will walk several strides, lowering his head to the ground and dragging his nose across it. He might swish his tail a few times. Then, you’ll feel his legs start to buckle underneath him. That’s when you react, because now, he’s committing to the roll. If you let him get any further in the process, you may be too late to stop him. So there’s a bit of a delicate balance there, where you don’t want to correct the horse too early, but you also don’t want to let him get all the way down on the ground.

With that being said, some horses have gotten into such a bad habit of rolling and have perfected their technique over the years that it can be extremely hard to catch the warning signs that they’re going to roll. It’s like one second they’re walking forward down the trail and the next you’re dusting dirt off your jeans. It takes an experienced horseman to feel and read the little warning signs the horse is throwing out. If your horse’s problem is this serious and you don’t feel confident correcting him, you may want to have a more experienced rider school on him.