First, let’s define what bucking truly is. What a lot of people call bucking is when the horse’s front legs stay on the ground and he kicks up his back legs. That’s not bucking. Bucking to me is what you see at the rodeo: All four feet are off the ground, the horse’s head is down low, his mouth is open, and he is bellowing like a cow giving birth.

Kicking up or “crow-hopping” is a simple demonstration of the horse’s lack of respect. What type of horse usually kicks up? A fat, lazy horse that doesn’t want to go forward. When you ask a horse like this to go from a jog to a lope, and he kicks up with his back legs, it’s his way of telling you to get lost. Most hot, nervous horses don’t kick up that much because they want to go forward.

On the other hand, most horses that are really bucking are not showing a lack of respect. They are most likely reacting to fear: fear of you being on their back, the girth, the back cinch, your legs, the spurs, something that jumped out of the bushes in front of them or a tree branch that brushed against their sides. Something caused the horse to use the reactive side of his brain. That’s how most horses learn to buck.

Sometimes, once a horse has dumped a rider three or four times and has gotten used to bucking, he starts bucking out of habit, not so much out of fear. At this point, what may have started out as a fear issue has now turned into a lack-of-respect issue.

Whether your horse is kicking up to demonstrate his lack of respect or truly bucking out of fear or habit, there are several ways to fix the problem. If he’s kicking up because he doesn’t want to go forward (which is most often the case), go back and get his feet moving better on the ground. Preferably, put him in a roundpen, and then point up in the air with your hand to signal him to move forward, cluck and spank—first spank the ground, and if necessary, spank him—until he lopes around the roundpen. Get him so hooked on you that as soon as you ask him to move by pointing with your hand, he immediately responds. If you get rid of his laziness and lack of respect on the ground first, when you get on him he’ll be a lot more willing to go forward. In fact, if you thoroughly do your groundwork, more than likely kicking up under saddle will no longer even be an issue.

When you do get on the horse and ask him to lope, first squeeze with both legs to ask him to go forward. Wait for a count of two, and if he doesn’t go, cluck. Wait for another count of two, and when he doesn’t go forward, spank him from side to side with the end of your mecate or a dressage whip. If you spank with rhythm and he kicks up with both his back legs, what do you do? You spank him again: WHACK, WHACK. You may have to spank him several times before he realizes that every time his hind legs leave the ground you will make him feel uncomfortable, but when he leaves his feet on the ground and goes forward, you will leave him alone.

I’ll be the first to tell you that you have to be a confident rider to go through this process. If you’re not, either make sure you do your groundwork thoroughly and correctly so that your horse will go forward as soon as you squeeze and cluck, or have a more experienced rider ride the horse for a few days to get his feet moving at the lope.

Tying a horse up after you’ve worked him hard does two things: It gives him a chance to get his air back and it gives him a chance to process the work you just did. This is not punishment—it is allowing him to absorb the lesson. The very worst thing you can do after working with your horse on a particular issue, especially one as serious as bucking, is to put him in his stall and feed him. Once he gets his mind on eating, you can be pretty sure it’s no longer on you! 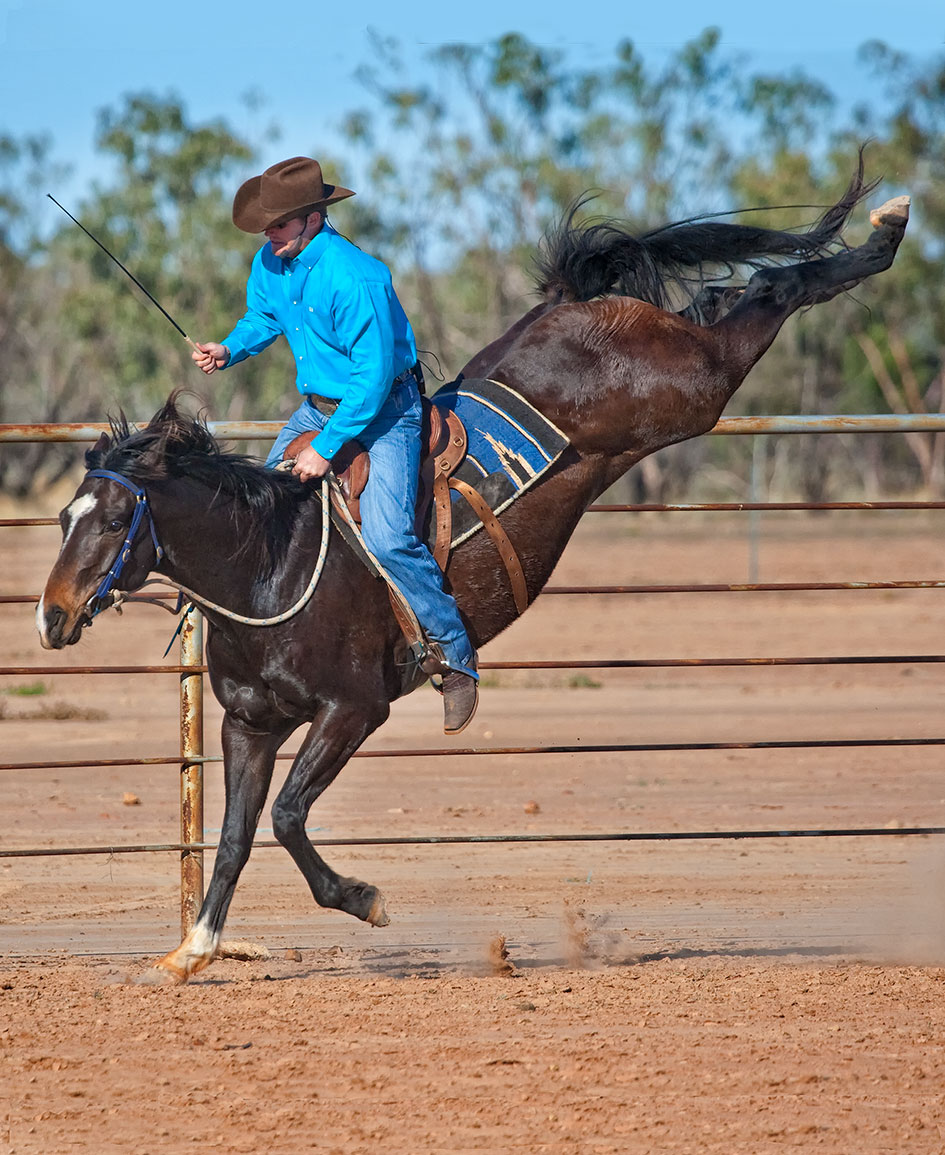 When a horse kicks out, one or both of his front feet stay on the ground while his back feet strike out. 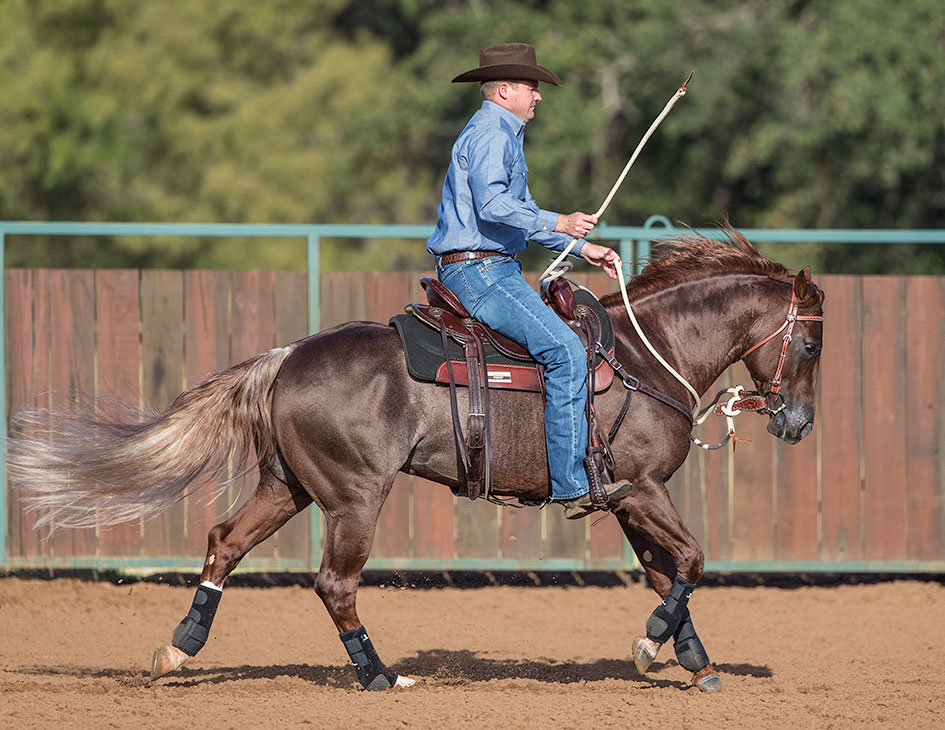 If a horse kicks out because he’s lazy, go back to the arena and get him responding to your cues better. Squeeze is asking him nicely to move forward. Cluck is warning him that if he doesn’t move forward you’ll make him feel uncomfortable. Spank is just that. Spank him until he moves forward at the speed you’re asking for. 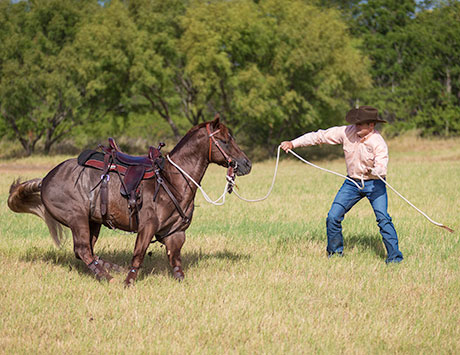 There’s no shame in correcting your horse from the ground. Hustle his feet by doing Lunging for Respect Stage Two so that he realizes that bucking was a big mistake and only resulted in more work. 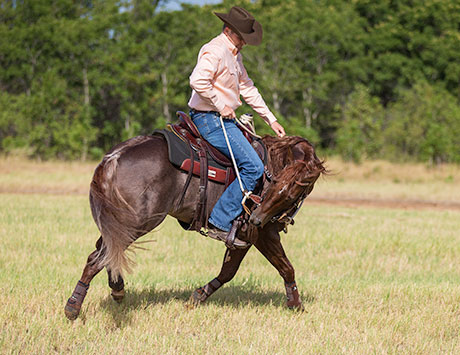 When you get back on the horse, hustle his feet, doing as many changes of direction as you can.

If your horse is truly bucking like he’s in a rodeo, the last thing you want to do is spank him, because he’ll only buck harder. That’s why you have to understand the difference between crow-hopping and bucking.

If he is bucking, immediately do a One Rein Stop— bend his head and neck around to one side and try to get him to disengage his hindquarters. By bending his head and neck and disengaging his hindquarters, you take away his ability to buck because his hind legs are moving laterally. As soon as he’s stopped, get off him and go right to work moving his feet from the ground.

Don’t get off and put him away or let him rest. If you do either of those things, you’ll teach him that bucking is what got you to get off his back. Hustle his feet so that he understands that bucking was a big mistake. Lunging for Respect Stage Two is a great exercise to do at this time, because you’ll be constantly asking the horse to change directions and he’ll have to put in a lot of effort. Really hustle his feet until he is tired and sweaty and using the thinking side of his brain. 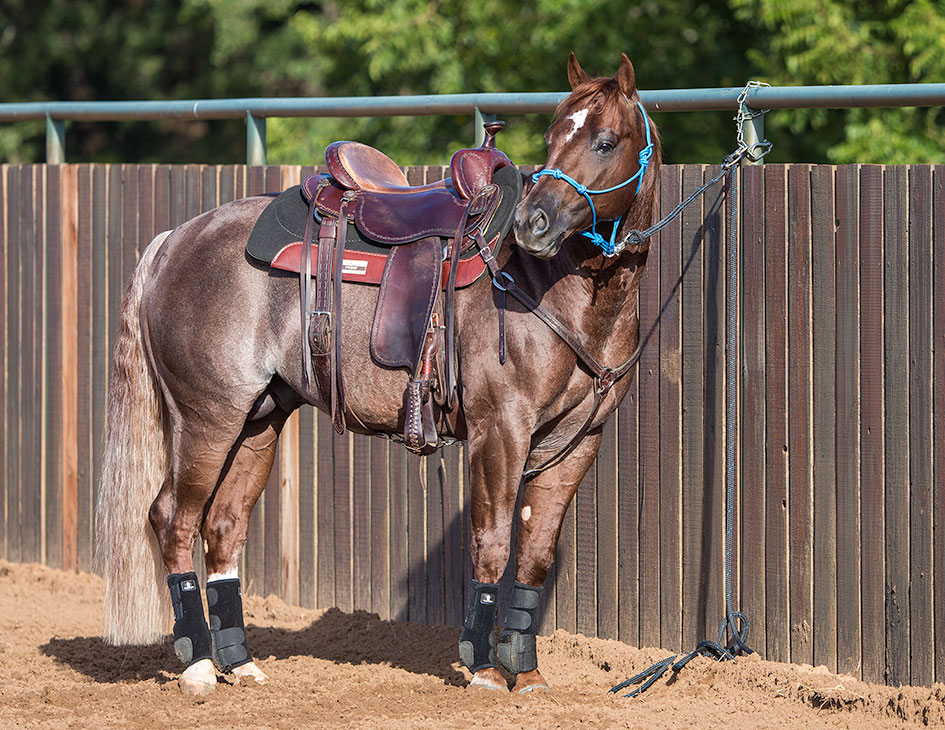 When you finish your training session, loosen the horse’s girth and safely tie him up for several hours. Then ride him again.

Like me, you’ve probably heard the old cowboy logic, “When you get bucked off, you have to get right back up on that bronc and show him who’s boss!” I don’t believe in that. If I get bucked off a horse, the last thing I ever do is get straight back on him. If you get right back on, chances are he’s just going to buck you off again. It’s just that simple. Instead, figure out why he’s bucking. Usually, the answer is because you’ve done a poor job of preparation on the ground. Remember what my mentor Gordon McKinlay told me: The more times you pick yourself up off the ground, the better your groundwork gets. It really is true. Every time I got bucked off a colt it was because I did a poor job of preparing the horse for the ride. Groundwork exercises are designed so that you can get control of your horse’s feet and mind on the ground before getting in the saddle.

So, as long as you’re not injured, immediately put the horse’s feet to work. If you are injured, you may have to put the horse away. That’s never an ideal situation, because then the horse realizes that bucking you off got a release of pressure; however, sometimes you have to do what you have to do. But the next time you get the horse out, you’d be smart to be thorough with your groundwork. In fact, you may spend three or four days focusing on groundwork to prepare him to be ridden again.

Sometimes a horse will buck on the trail if he brushes up against a thorny bush and gets poked or if you’re riding him along a narrow path and a branch grabs his flank. It could be any similar situation that involves the horse getting startled, and the reactive side of his brain comes out. If this happens, regain control of the horse as fast as you can by doing a One Rein Stop. Then, spend time desensitizing the horse to whatever it was that startled him. If he was going through a narrow passage and a branch brushed against his flank, walk him back and forth through it. If the horse rushes down the path, bend him around in a few circles and then walk him back through it. Repeat that process until the horse is using the thinking side of his brain and calmly walks through the passage without overreacting. 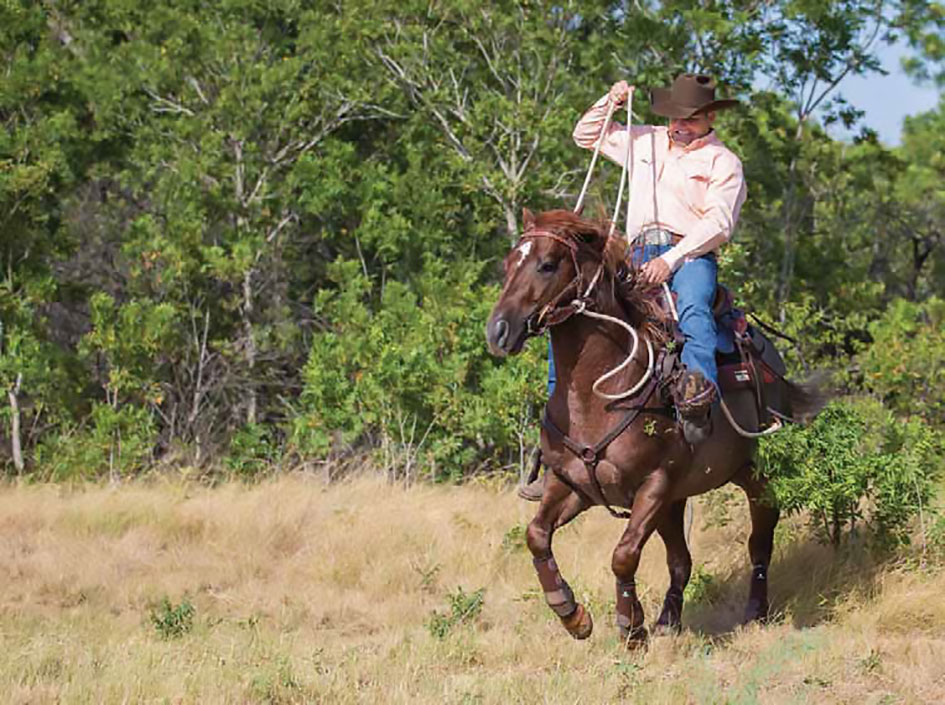 Sometimes horses that buck are startled into it. Your horse could brush up against a cactus and get stuck or be going down a narrow path and have a branch grab his flank. Don’t pull on two reins like I’m doing here. Use one rein to gain control.