There are few things as frustrating or as embarrassing as having to deal with a horse that refuses to go into the arena. Chances are you or someone you know has had to deal with an arena-shy horse, especially if you compete in timed events. Think of the situation from the horse’s perspective. Outside of the arena he gets to relax with his buddies while inside the arena he has to work hard and hustle his feet. As soon as he leaves the arena, he’s allowed to rest and be with his friends again.

Horses are basically lazy creatures, meaning that they always pick the option of the least amount of work. So when an arena-shy horse is walked towards the arena, his only thought is how he’s going to get out of having to go into the arena to work hard. That’s when he rears, spins around and backs up—anything he can do to not go in the arena. When a horse is misbehaving, he uses the reactive side of his brain; he’s energetic and wants to go somewhere. And the more you try to force him to behave, the more upset and nervous he gets. 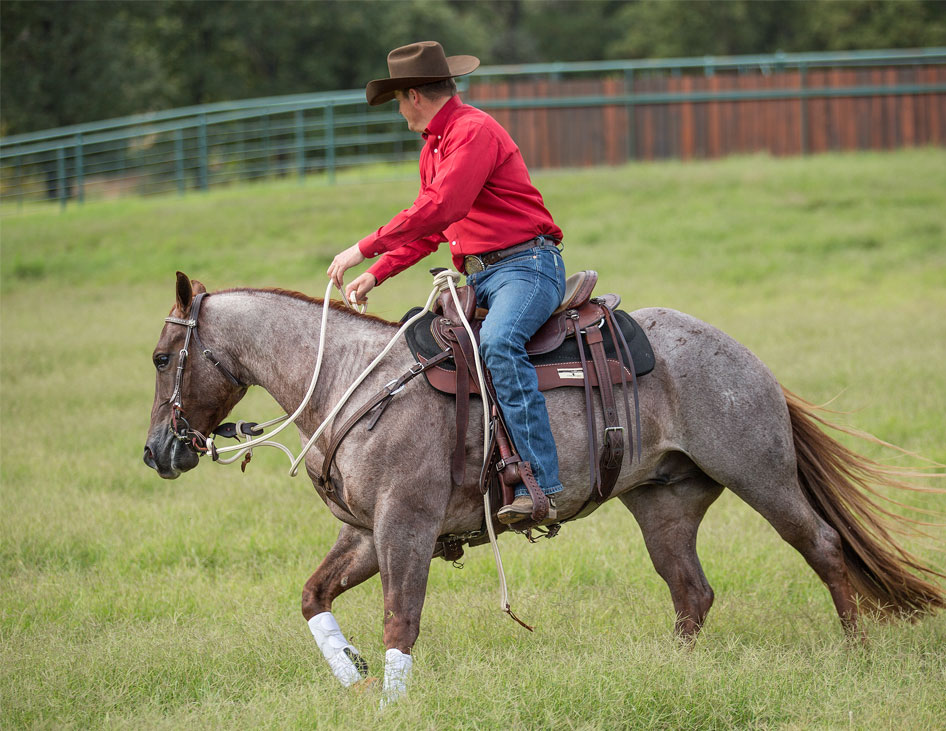 Hustle the horse’s feet outside of the arena. What you make him do isn’t important; just make him move with energy and do a lot of changes of direction.

Depending on how arena-shy your horse is, you might only be able to get him within 150 feet of the arena before he starts misbehaving. That will be your starting point. Using one rein to direct him, you’ll work the horse hard, hustling his feet and constantly making him change directions. The more you change directions, the more he’ll use the thinking side of his brain.

Some examples of exercises you can use are: serpentines, rollbacks, trotting or cantering circles, etc. Keep in mind that you’ll be wasting your time if you let the horse drag his feet and daydream about his next meal. Make him hustle his feet and give him a reason to want to go in the arena and relax. 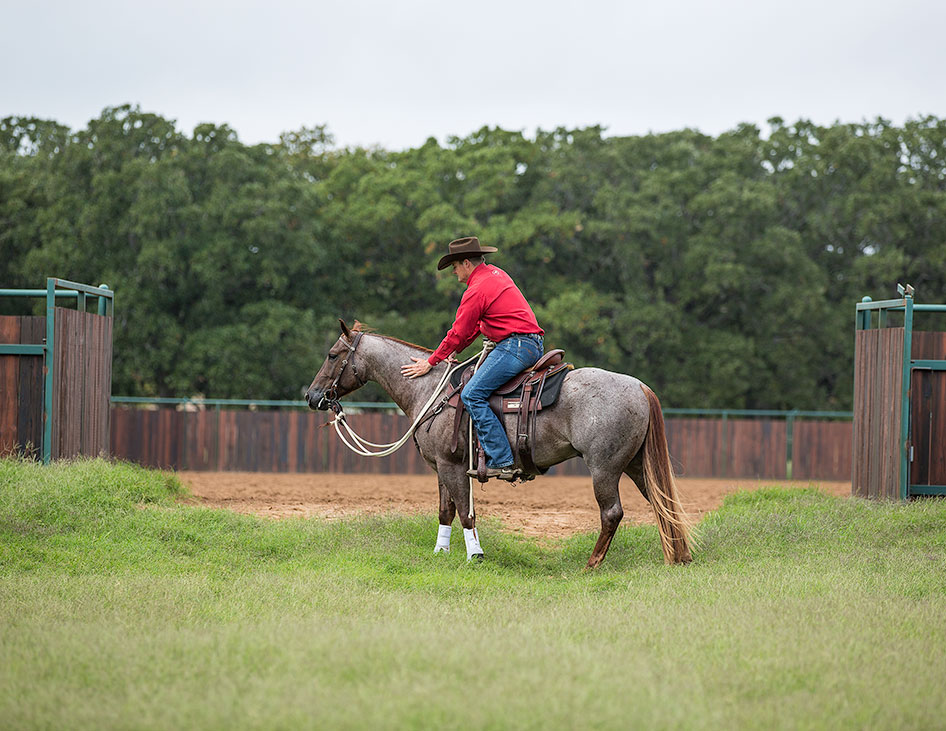 Each time you bring your horse to the arena, gradually get closer to it. At first, you may only get near it. 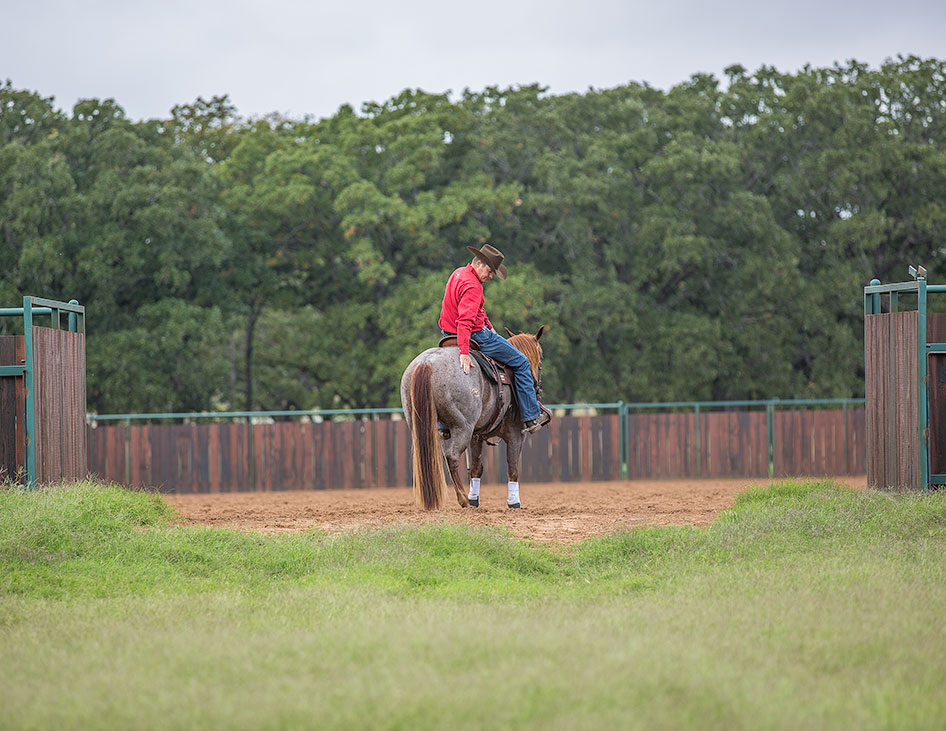 Then you’ll get him to step inside it and relax. 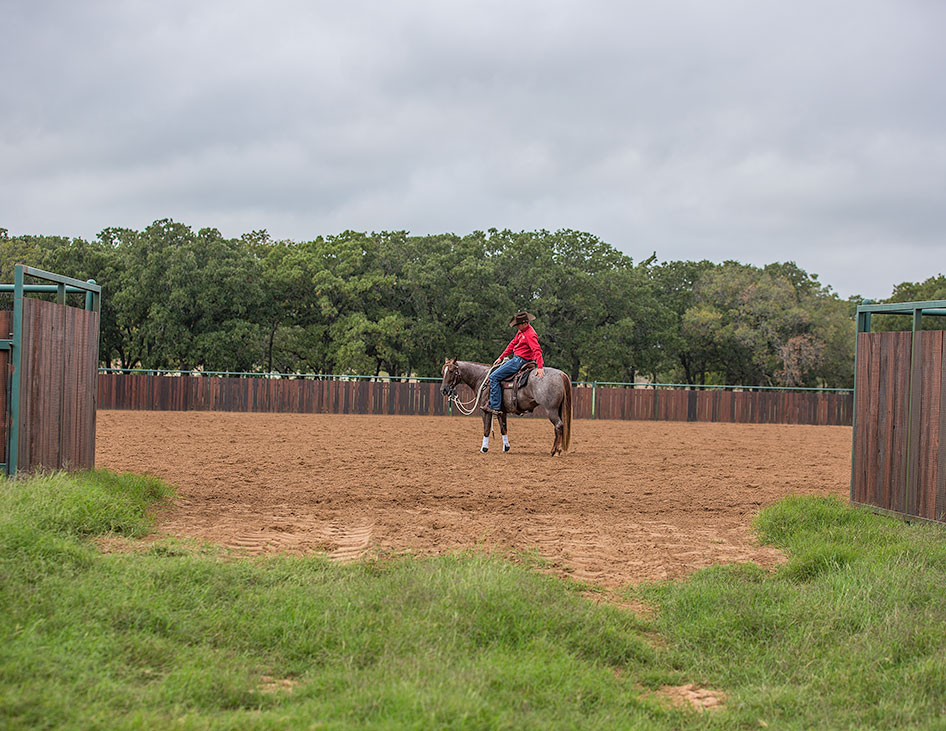 Finally, you’ll be able to ride him to the middle of the arena without an issue.

When you let the horse rest, drape the reins down his neck and dare him to move. If he wants to move, let him. Take him back to where you were working him and hustle his feet. Instead of sitting on the horse and saying, “Don’t go!” let him move, making it your idea by hustling his feet, and then offer him the chance to stand still and relax. You have to give him a reason to want to be in the arena and to relax. 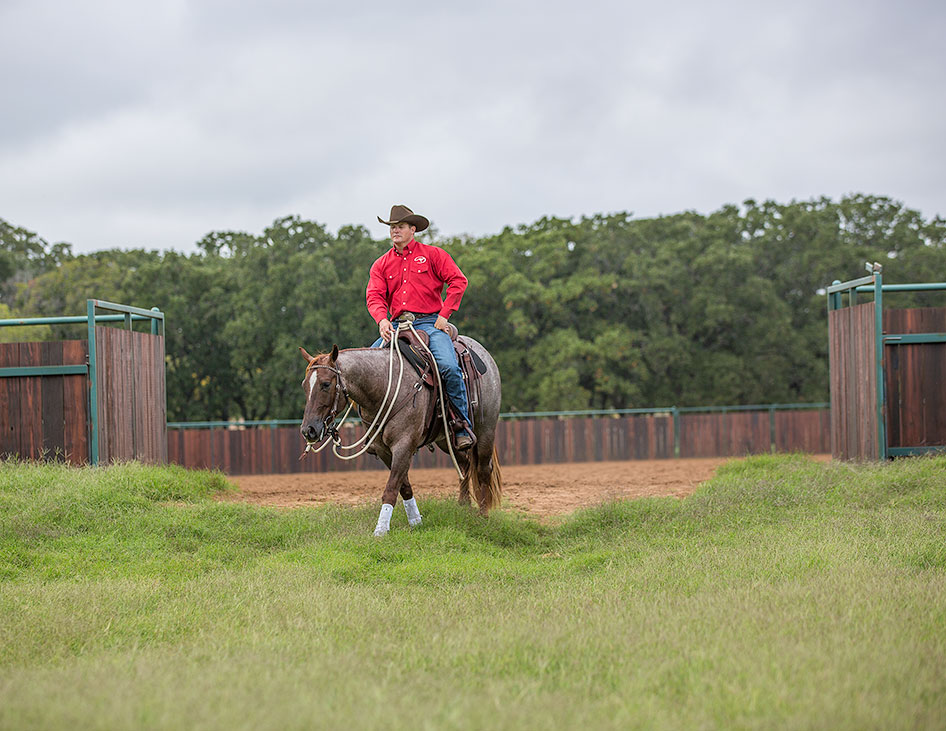 When you ride your horse away from the arena, do so in a relaxed manner.

Do the Opposite of What Your Horse Expects

The arena-shy horse thinks that as soon as he steps one hoof in the arena he’s going to have to work hard and sweat. Instead, once you’ve got him calmly and willingly walking into the arena, let him relax and get off of him. Put him in the barn and take the saddle off. Do the exact opposite of what he expects. 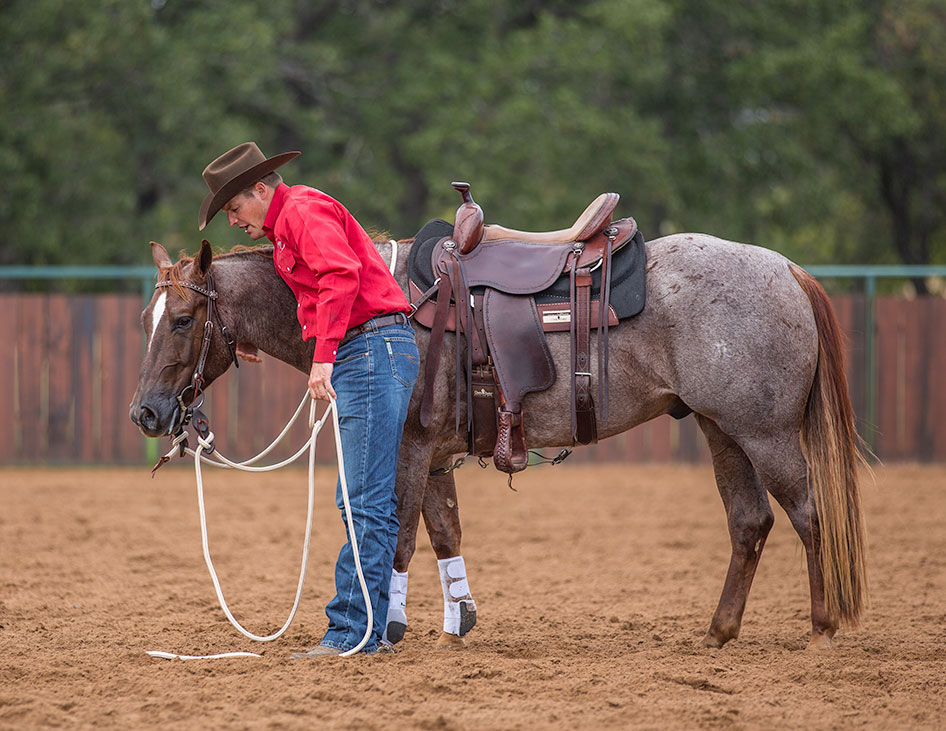 When you’ve got the horse riding calmly into the arena, do the opposite of what he expects: dismount and take him back to the barn.

With repetition, he will soon learn that he has no reason to fear the arena. Whatever you do, don’t get the horse in the arena and immediately start working him hard, because then you’ll have to start the whole process over again. Once you’ve built the horse’s confidence about going into the arena, you can certainly start working him in the arena. However, keep in mind that this is a problem that often requires regular maintenance. If you compete in timed events, you may be able to put three good runs on your horse before he starts getting anxious about going into the arena. At that time, you’ll need to practice the method I just outlined. Remember, horses are nothing more than maintenance with legs.

Log on to the No Worries Club website and watch TV show #260: A Barrel of Problems. In this episode, a barrel racer visits the Downunder Horsemanship Ranch needing help with her arena-shy and out-of-control gelding. I teach her how to be an effective leader in the alley to give her horse the confidence to go in the arena, and then give her the knowledge to fix the horse’s out-of-control behavior around the barrels.

Consistency is Your Greatest Ally

Practicing this exercise one day isn’t going to cure an arena-shy horse. On the first day you may get the horse inside the arena, but that’s just the start of the process. Remember, when training a horse, consistency is your greatest ally and inconsistency is your greatest enemy. You have to consistently chip away at his fear and resentment of going into the arena every day. If you do that, eventually you will be able to eliminate the problem.