At some stage of horse ownership, you will probably come across a horse that doesn’t like to be clipped.

Whether it’s around the head and face or the legs, a lot of horses are frightened of clippers. To us, clipping seems like something very acceptable. We know the clippers aren’t going to hurt the horse, but the horse doesn’t. Remember: horses are prey animals; they perceive anything new as potentially life threatening. Until you prove to them otherwise, they are not going to willingly accept anything in the “Unknown Object” category. The good news is that there is an easy way to teach your horse to accept clipping. Follow these steps and with practice you will be able to clip your horse without having to fight with him or restrict him in any way. The key is to break the process into steps and to teach the horse that the noise and the feel of the vibrating clippers are not going to hurt him. The smaller the steps, the easier it is for him to understand.

The name given to this process is “Desensitizing.” When you’re desensitizing your horse, the goal is to maintain the pressure until he stands still, relaxes, and pays no attention to what you’re doing, at which point you should retreat. This is the behavior I am looking for when I clip my horse — for him to stand relaxed and not worry about the clippers.

Can you rub your hand all over your horse’s face and ears? Can you wave them around his eyes? If your horse has any resistance to your bare hands on his face and head, you can hardly expect him to stand still for clippers. You would be amazed at how many people wonder why their horse won’t accept being clipped, when the truth is these same people can’t even touch the horse’s ears with their hands. Step 1, then, is to get your horse to accept your hands on his face, muzzle, ears and around his eyes. Once you have accomplished this step COMPLETELY, move on to Step 2. DO NOT move on if there is ANY resistance from the horse, no matter how long it takes.

If you find an “Oh no! Don’t touch me there!” spot on your horse, continue to rub him in that same area until he stands still and relaxes. When that happens, retreat and rub him somewhere else on his face or body that he is comfortable with. Then approach the sensitive area again. Continue using this method, called Approach and Retreat, until there are no off-limit spots around your horse’s head.

Now I want to be able to take the clippers in my hand – turned OFF – and desensitize the horse to having the clippers around him. Let him smell the clippers. Then rub them over his face and wave them around his eyes and ears. Remember if your horse won’t stand still for the clippers when they are not even turned on, what makes you think that he will stand there when you do turn them on? Using the Approach and Retreat Method, make sure that he will tolerate the feeling of the clippers on all parts of his face, eyes and ears – especially inside the ears.

BE PATIENT. If this takes a few days, go ahead and spend that time – it will save you time in the long run if you take the time now to do this step right. As before, make sure that the horse is showing no resistance to this step before you move on. 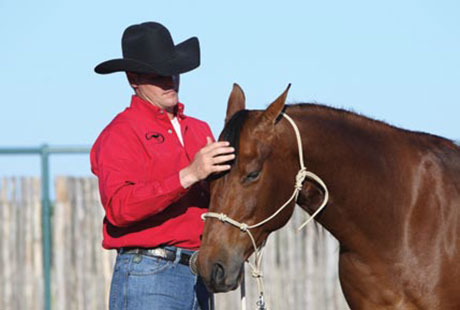 Make sure you can rub your hands all over your horse’s face to make sure he doesn’t have any “Oh no! Don’t touch me there!” spots. 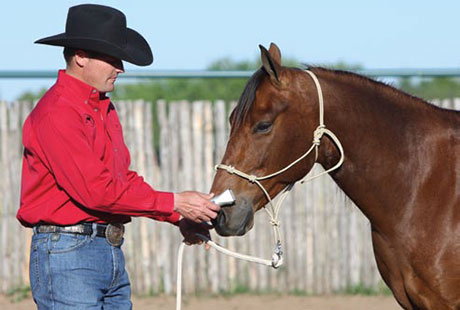 With the clippers turned off, use Approach and Retreat to make sure that the horse will tolerate the feeling of the clippers on all parts of his face, around his eyes, and in his ears.

1. Do your clipping training sessions after a workout — not when your horse is fresh. After some groundwork or riding exercises your horse will be in a “thinking” frame of mind and the time you spend with him will be more productive. I like to do some desensitizing with the clippers in between my groundwork exercises or at the end of the session. When I do this I know that the horse has been worked both mentally and physically, and I have him at a point where he is more likely to accept something new than if he was feeling fresh and inattentive.

2. Don’t tie your horse up when you are conducting a clipping session. This will cause the horse to feel trapped and claustrophobic; and if he panics and pulls back, you may create another problem. Put your horse in an open, yet confined area like a round pen. This way, if he wants to move his feet, he can – but he can’t go very far. I would also avoid doing this in the horse’s stall. The stall is too restricting; and if something causes him to panic or feel trapped, there is nowhere for you to go and you could get hurt.

3. BE CONSISTENT! Don’t spend three hours once a week trying to teach him everything in one session. Break the steps down and work on each one a little bit every day. Children go to school five days a week because they learn best with constant repetition of information until it is absorbed. Horses are just the same. If I spend 5-10 minutes every day for 30 days, by the end of the month my horse is completely accepting the clippers, he is relaxed and there are no problems. If you only do this once or twice a week, not enough consistency is being provided for your horse to understand the lesson; and he won’t learn as quickly or as well. You can still get results even if you are inconsistent, but you will not be able to expect the horse to advance as quickly. Ideally, keep the clippers in your pocket when you go out to do groundwork with your horse. In between every sensitizing exercise, pull the clippers out to desensitize him for three or four minutes. By the end of the groundwork session, you’ll have desensitized with the clippers four or five times in a relatively short amount of time.

Once the horse accepts the clippers around his head while they are turned on but not touching him, it is time to rub them all over the horse’s face and nose, around his ears and on the poll with the clippers turned on. This will create a new sensation – the clippers are vibrating against his skin. The horse may act frightened, but this is a normal reaction. Just keep rubbing the clippers around the area he is uncomfortable with until he begins to relax his head. As soon as he does, turn the clippers off and rub him. Remember: approach and retreat. In the beginning, you might want to work on one area of his head at a time, starting with his muzzle and working your way up to his ears. (Don’t ever begin with the ears.) As he relaxes in each area, you can expand the places you are rubbing until you can do it all over his head. 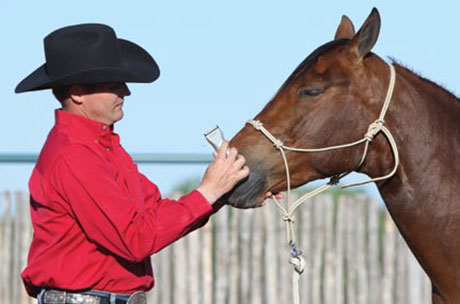 Once you can have the clippers turned on and move them all around your horse’s head, start rubbing him all over his face with the backside of the clippers so that he feels the vibration.

Once your horse is absolutely perfect with all of the previous steps, you are ready to begin clipping the hair on his face and ears. However, if you are still getting ANY resistance from the horse to ANY of the steps up to this point, you will only make matters worse by proceeding. Actually clipping the hair is another new feeling, and the horse may react to the sensation. Again, don’t start with the ears. Start at the muzzle and work your way up to the ears. From the muzzle, go under the chin, up his face, around his eyes, then on the bridle path and poll area. Then you can start to work on his ears. To continue the Approach and Retreat Method when you are actually clipping, it is a good idea to do a little bit of clipping and then go back and rub the clippers over areas that you have already clipped. Find a starting point: clip a tiny bit, then rub that spot with the clippers for a few seconds, then clip a tiny bit more, then rub. If he gets suspicious or frightened, going back to rubbing the areas already clipped will help him relax, then turn off the clippers and rub him with your hand to show him you’re not trying to shove it down his throat. If you work on these steps a little bit each day, after a week or so you should be able to clip anywhere on your horse’s body with no resistance. 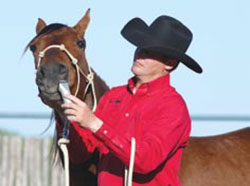 Once your horse is comfortable with the clippers being rubbed all over his face, you can put the blade back in and begin to actually clip him. Take your time because this is going to be a different sensation for him. Start with the muzzle, then under his chin, and then start moving up his face . . . 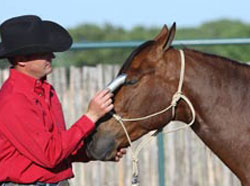 . . . go around his eyes, and then up to his bridle path and poll area. 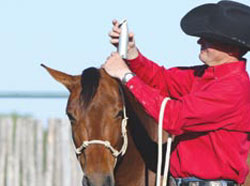 Always clip his ears last. You may still have a little extra resistance here, but just remember to use Approach and Retreat — and don’t try to clip too much at one time. It never hurts to go back a step to letting your horse become more comfortable with the vibrating sensation.

If you are having trouble getting the horse to accept the next step, it could be because you haven’t spent enough time on one or more of the previous steps and your horse is not desensitized enough to proceed. Just go back through the steps and find the hole in his training. Work on this step until you have it completed, and then continue forward from that point. The last thing you want to do is to try to go ahead and clip the horse before he is properly desensitized to the noise, the movement and the feeling of the clippers. Once this is properly done, the actual clipping experience should not be difficult at all.