Get the Right Start with the Method

If you’re expecting a foal or starting a colt this spring, Clinton has laid out a step-by-step guide to using the Method to give your young partner the best start. “The earlier you start working with a horse, the sooner he learns to trust you and learns the right behavior,” Clinton explains. “It’s certainly easier to teach a young horse the right behavior than it is to retrain an older horse that’s developed bad habits.” At the ranch, Clinton and his staff begin each horse’s training by imprinting the foals at birth, establishing trust, and teaching them the basics of leading and haltering. They follow the Foal Training Series, teaching the young horses all 36 exercises included in it. Once the young horses learn to lead with a halter, many of the exercises they are taught come straight from the Fundamentals groundwork exercises, modified for a young horse. Because foals aren’t full grown and don’t have the same stamina as adult horses, the same expectations and level of performance isn’t expected of them.

“Moderation is the key when it comes to training foals. You don’t want to underwork or overwork them,” Clinton warns, and recommends working with foals 15 to 20 minutes once or twice a day and giving them short, frequent breaks throughout the session. “You’re not going to be working the foal as hard as you would work an adult horse because he doesn’t have the same stamina as a grown horse. With foals, you have to be conscious that you don’t run them out of air. Once a horse is out of air, he stops thinking and quits looking for the right answer. Then his focus is solely on survival and finding air,” Clinton explains.

In the Foal Training Series, Clinton demonstrates how to imprint a foal and details the training process all the way through weaning the foal when he’s 4 to 6 months of age. “Raising a foal is one of the most rewarding experiences in the world. You’ll get to witness your foal’s progression from a timid newborn to a trusting and respectful partner. But, raising a foal is also a huge responsibility,” Clinton adds. “What you teach your foal now will serve as the foundation for the rest of his life. Working with your foal and teaching him the Fundamentals will give him a head start on his career and put a solid foundation in place from which you can build off of.”

The series follows the progression of two foals—Sarah, a filly Clinton imprints just hours after birth, and Fergie, a month old filly that hasn’t been handled at all. Along with explaining soughtafter success tips and troubleshooting advice, the series details how to positively introduce new experiences to a young horse, all while building the foal’s confidence. Clinton takes practical innovative approaches to a foal’s first exposure to handling feet, tying and other everyday occurrences a foal will encounter. 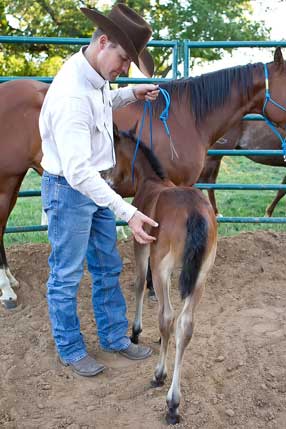 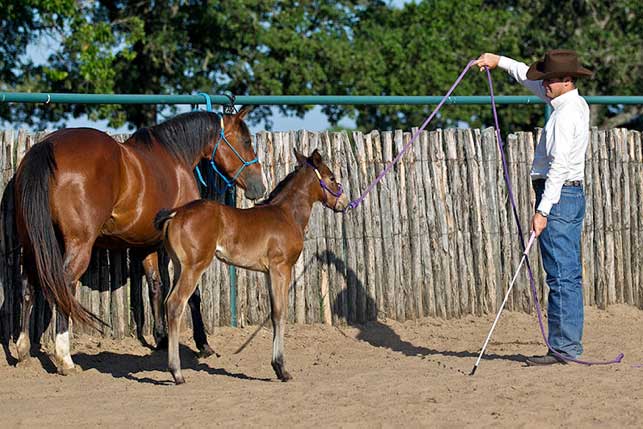 In the Foal Training Series, Clinton explains how to teach the Fundamentals modified for a young horse. Here he’s teaching Yield the Hindquarters using steady pressure (above) and the Sending Exercise (below).

On average, it takes Clinton and his staff six weeks to take a foal through the entire Foal Training Series. “Once the foal knows the series, then he’s turned out in a pasture and just allowed to be a horse. Every couple of weeks, we’ll go out and review the exercises with him until he’s weaned,” Clinton says.

Once the foal is weaned, then he is worked with six days a week and taught the Intermediate groundwork exercises. “When he knows the Intermediate exercises, he’s turned back out in the pasture and we review the exercises with him every couple of weeks,” Clinton says.

When the young horse turns a year old, he’s taught the roundpenning exercises. “I don’t roundpen my young horses until they’re yearlings because they can’t physically handle it. During their yearling year, I do teach them the exercise and expect them to canter. But again, we’re using common sense here—we’re not working the horses until exhaustion,” he points out.

When the horse turns 2, he’s taught the Advanced groundwork exercises and gets started under saddle. Since the horses on the ranch have been handled since day one and know the Fundamentals and Intermediate groundwork exercises well, when it comes time to start them, it’s just another lesson for them. Their first rides are as textbook perfect as it gets.

Clinton explains his technique for starting horses in the Colt Starting Series that details over 50 exercises. While the horses at the ranch don’t pose much of a challenge to start since they’ve been handled since birth using the Method, Clinton knows that not everyone has the luxury of raising a foal and then breaking him to ride. That’s why in the Colt Starting Series, he explains the technique he uses to start young horses using a wild mustang. “I used a wild colt for this series because a wild horse doesn’t let you skip any steps; he forces you to be extremely thorough every step of the way,” Clinton says. “I would rather break down the series into more steps than someone might need rather than leave out important information that could be valuable to starting your horse.”

Working with the mustang, Clinton demonstrates how to establish first touch, halter the horse and teach him how to lead. From there, he begins to work on the Fundamentals groundwork exercises, tweaking some techniques for the wild horse and adding extra desensitizing exercises to ensure the horse is well-prepared for his first ride. A good portion of the series is dedicated to saddling and preparing the horse for a rider’s weight. “You cannot over prepare a horse for his first ride, but you can certainly under prepare him,” Clinton warns. “When I was apprenticing with Gordon McKinlay I learned this lesson the hard way. I want people to learn from my mistakes (and pain!) rather than their own. That’s why I go over every single detail of how to start a horse and include what to do if things go wrong.”

Clinton spends the first two and a half rides on each colt in a roundpen, and then rides the colt in an arena where he can focus on getting the horse to move his feet. “Once you’re confident you can cue the horse forward on your own and shut him down, it’s crucial to get him out of the roundpen and into a larger area where you can really move his feet. The smaller area you ride a horse in, the more it shuts them down mentally, and that’s when horses start to get pinny eared and sour,” Clinton says.

After the first three rides, the young horse’s training program follows the Fundamentals riding exercises. “The first six weeks of a colt’s life under saddle are the most important in his career. It’s vital that his training runs smoothly so that he doesn’t develop any bad habits,” Clinton explains. “Training young horses is certainly rewarding, but unless you have the knowledge to get the job done, things can go wrong very quickly. A great deal of time went into producing both the Foal Training Series and Colt Starting Series to guarantee everything was covered to ensure horse owners at home can get the same success with their horses as we do at the ranch.” 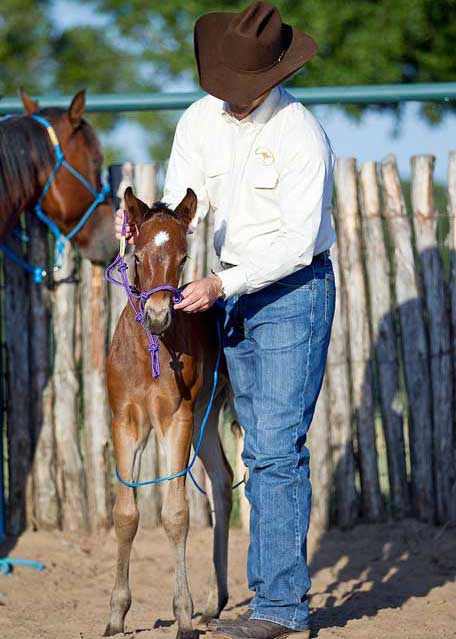 No matter if you’re starting a colt or training a foal, having access to and knowing the Fundamentals is important to your overall success. Clinton produced the Foal Training and Colt Starting Series as supplements to the Fundamentals Series, and both series are shot more like training diaries than the strict 8 Steps to Success lesson format of the Fundamentals. “That’s not to say we don’t follow the 8 Steps in the Foal Training and Colt Starting Series, because we do, we just don’t go into as much detail as we do in the Fundamentals,” Clinton clarifies. “By the time you’re ready to work with a foal or start a colt, your horsemanship skills need to be better than average, and that means that you should know the Fundamentals of the Method well.” Ideally, if you’re starting a colt, you should be proficient at the Intermediate and Advanced Series as well.

“I want people to learn from my mistakes (and pain) rather than their own.” 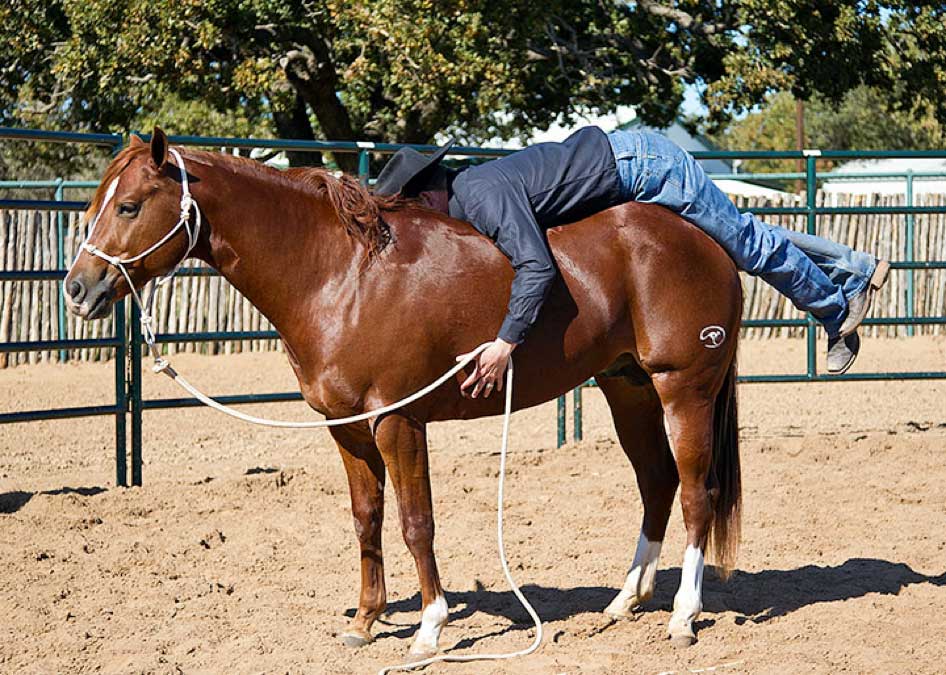 Clinton’s number one focus when working with horses, but especially colts, is safety. The Jeffrey’s Method is an extra step he takes to desensitize colts to his touch and weight before getting in the saddle.

Where to start with your hores:
two common questions answered 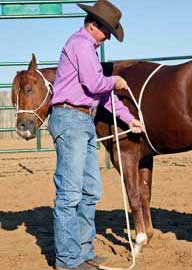 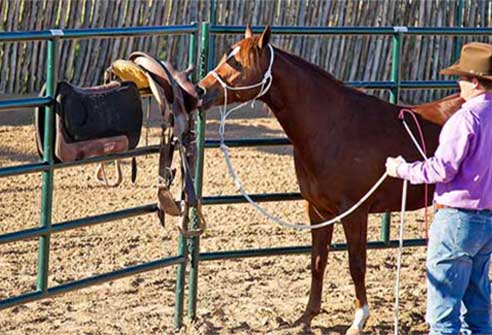 In the Colt Starting Series, Clinton focuses on saddling a colt for the first time. He first desensitizes the horse to pressure around his barrel (top), lets the colt investigate the new objects he’ll be wearing (top center), desensitizes the colt to the saddle pad (bottom center), and explains the importance of moving the horse’s feet after saddling him (bottom). 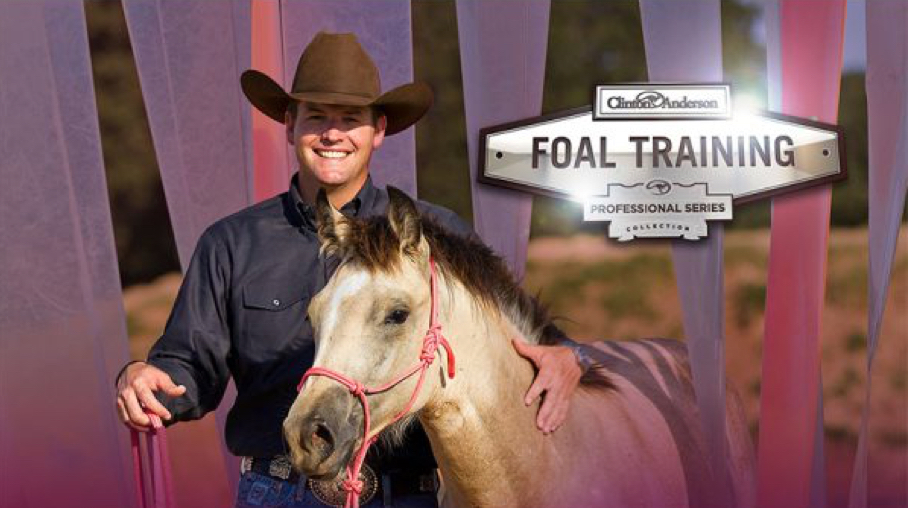 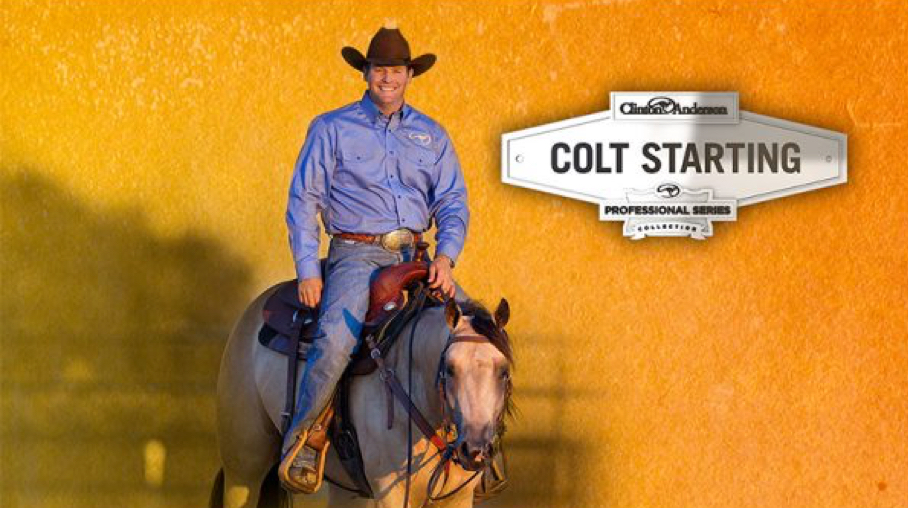