IS YOUR HORSE A HARDCORE SPRAY-A-PHOBIC WHEN IT COMES TO FLY SPRAY? USE THESE STEPS TO TAKE HIS WORRY AWAY AND BUILD HIS CONFIDENCE IN THIS ROUTINE TASK.

1. Desensitize your horse to fly spray in an open area where he has plenty of room to move his feet. The worst thing you can do to a horse that is using the reactive side of his brain is to work with him in a tiny area where he can’t move his feet, such as a stall, barn aisle or on crossties. As prey animals, horses have a flight or fight instinct. When a horse can’t move his feet and his ability to run from the situation is taken away from him, his only other option is to fight. That’s when he’ll strike out, rear and do anything in his power to avoid the situation.

2. Most people fail when it comes to putting fly spray on their horses because they sneak up on them— very much like a predator. They walk slowly up to the horses with the spray bottle hidden behind their backs and then they whip the bottle out and try to spray the horses as fast as they can.

3. Of course the horses get scared and try to run away, and as soon as they move, people stop spraying because they don’t want to upset their horses more or waste the fly spray. But by taking the fly spray away when the horses move their feet, they’re teaching them that to get away from the fly spray all they have to do is use the reactive side of their brains and move. That’s the complete opposite of what you want to have happen.

Using the Approach and Retreat Method, you’re going to teach your horse that the quickest way to get rid of the fly spray is to stand still and relax. You’ll build the horse’s confidence by approaching him with the object that scares him (in this case the fly spray) and then retreating (taking the fly spray away) when he stands still and relaxes. When a horse relaxes he’ll do one of five things: 1) cock a hind leg, 2) lick his lips, 3) take a big breath, 4) lower his head and neck or 5) blink his eyes.

4. Stand at a 45-degree angle to the horse’s shoulder with his head tipped slightly towards you. This will make it easy for you to remain in control in case he gets frightened and tries to move away from the spray. If he moves, you’ll follow him and keep his head tipped towards you while continuing to approach him with the fly spray. As soon as he stands still and shows a sign of relaxing, you’ll retreat and take the fly spray away. Start by desensitizing the airspace around the horse’s body to the noise the spray bottle makes. When he accepts that, you’ll progress to misting the water over his topline: his withers and back, hindquarters and neck. Always start on the horse’s topline because it is the least sensitive area on his body. 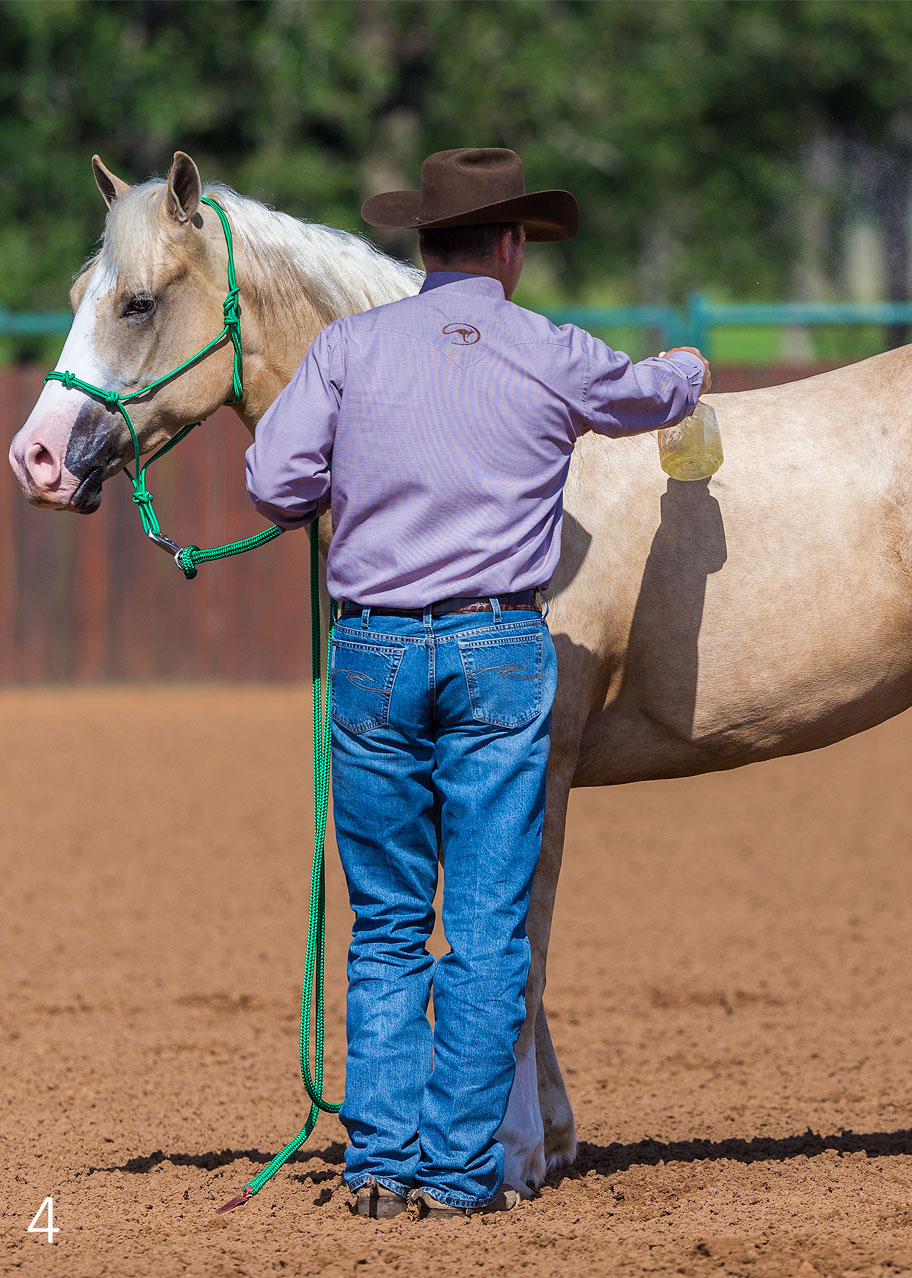 5. Get one area of the horse’s body good before moving on to a new one. The more thorough you are, the better job you will do. If the horse wants to move away from you, follow him wherever he goes, using the lead rope to keep his head tipped toward you. When he stands still and relaxes, retreat and take the bottle away.

6. When the horse’s topline is desensitized to the fly spray, desensitize his legs using the same approach. Remember to stand at a 45-degree angle to the horse’s shoulder to keep yourself in a safe position. When you desensitize the horse’s front legs, you may need to take a couple of steps backwards, staying on the same angle, so you’re able to spray his leg.

7. When you work on the horse’s back legs, don’t be surprised if he kicks out at the spray. Horses are defensive around their legs because they rely on them for survival. A horse can’t run from danger if he doesn’t have any legs. If the horse does kick out, he’s just unsure of what you’re doing and is trying to protect himself. Ignore his behavior and keep spraying until he stands still and relaxes. He can’t hurt you as long as you’re standing at a 45-degree angle to his shoulder and have his head tipped toward you. As soon as he keeps his feet still and shows a sign of relaxing, retreat and take the fly spray away. I recommend putting the nozzle on the jet setting so that you can reach the hind legs without having to get too close initially. 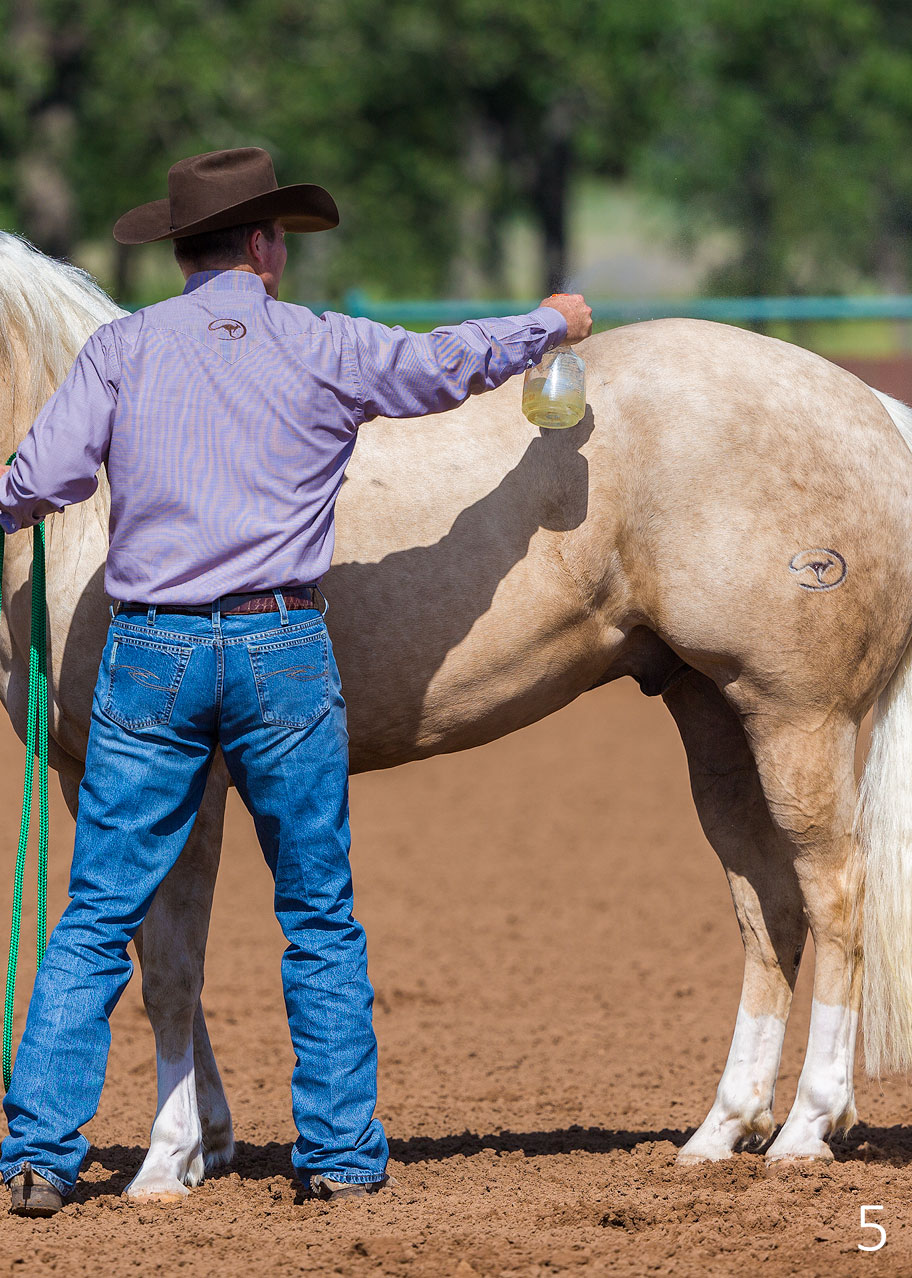 Practice this desensitizing exercise at the end of a training session when your horse is a little tired and sweaty and is looking for a rest. He’ll be using the thinking side of his brain rather than the reactive side and be ready to stand still and relax. He’ll also probably be sweating a little bit and when you mist him with the spray, it’ll feel good to him. The worst time to try to desensitize a horse to fly spray would be when he’s fresh and full of energy because he’ll want no part of standing still and relaxing. Always set your horse up for success.

8. Then switch sides and repeat each step on the new side of the horse’s body. Remember to start by desensitizing the airspace around the horse first and then progress to spraying his body. When you go to the new side, you’re dealing with a new brain, so be very thorough and act like you’re training a completely separate horse.

9. When both sides of the horse’s body are desensitized to the fly spray, desensitize his head. Be sure that the spray bottle is set to the mist position. Horses are very sensitive around their heads. Don’t make the experience any scarier for the horse by setting the bottle to the highest level. The less scary you make it for him, the faster he’ll progress. Staying at a 45-degree angle to the horse’s shoulder, step out in front of him and begin desensitizing the airspace around his head. Before you touch the horse with fly spray, let him get comfortable with it in the air next to his head. The horse will probably throw his head in the air when you start spraying. Ignore his behavior and wait for him to stand still and relax.

As soon as he does, take the spray bottle away. Then approach him again and continue the process until he remains standing still and relaxed while you spray the airspace around his head. 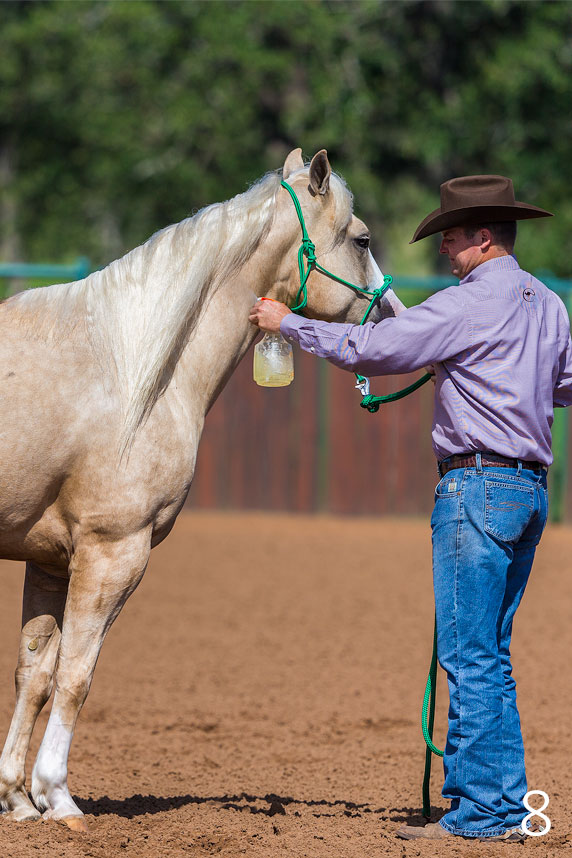 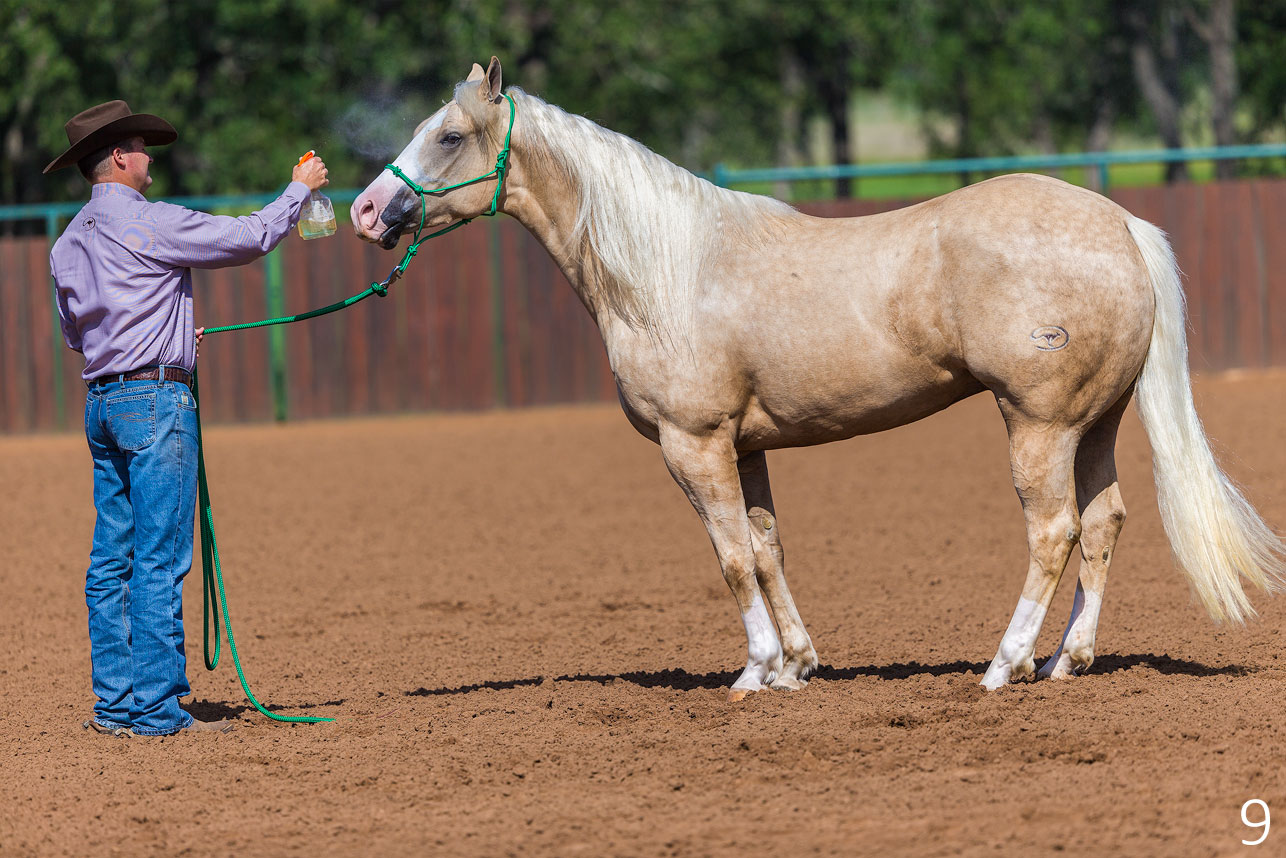 After you’ve desensitized both sides of his face, stand a couple of feet in front of him and spray the middle of his face. Be sure that you keep the horse’s eyes on you when you step out in front of him. If he tries to turn away, bump on the lead rope to get two eyes.

10. When you actually use fly spray, cover the horse’s eye with your hand so that the spray doesn’t get in his eye and irritate it.

11 When you’ve done a great job of desensitizing your horse to fly spray, you should be able to apply it anytime and anywhere while he stands still and relaxes. Shaq, the Signature Horse used for this lesson, could care less about me putting fly spray on him. 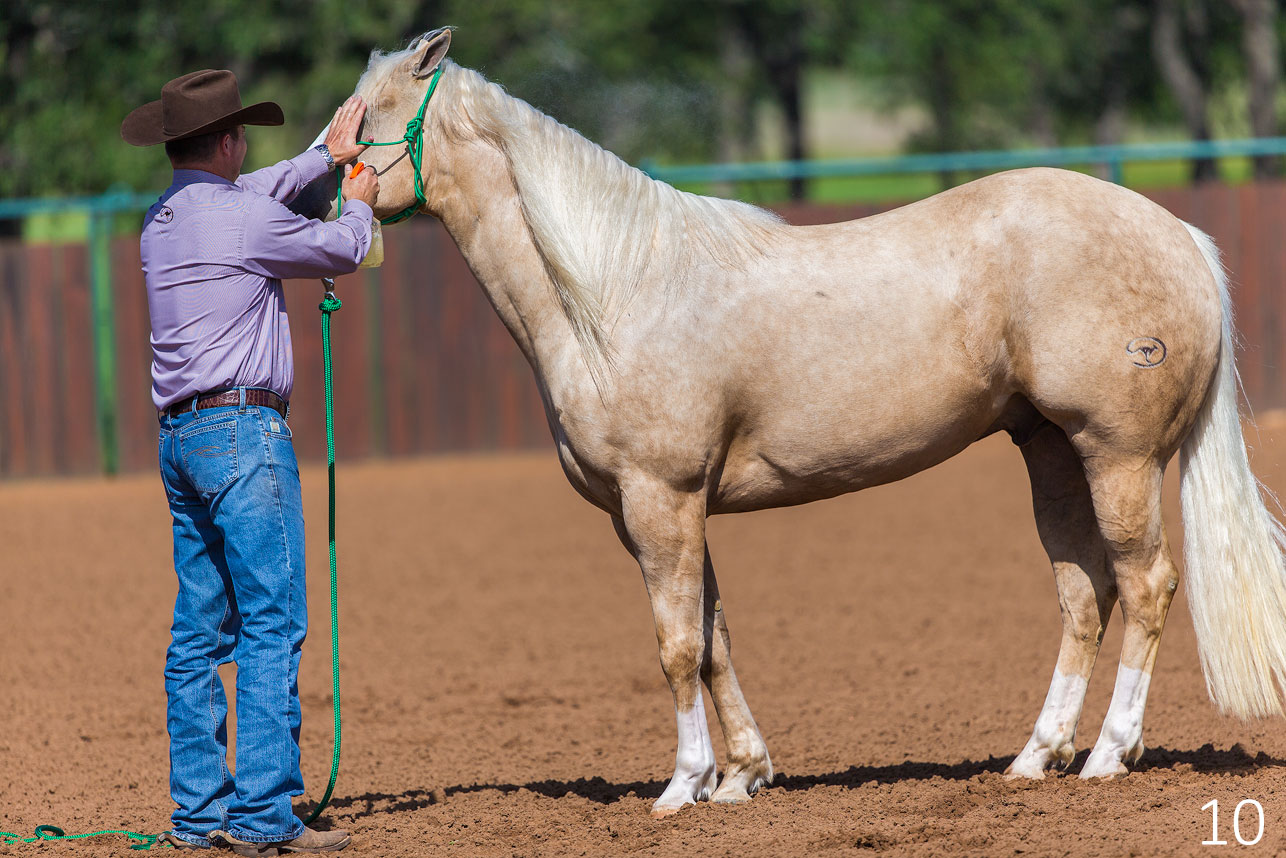 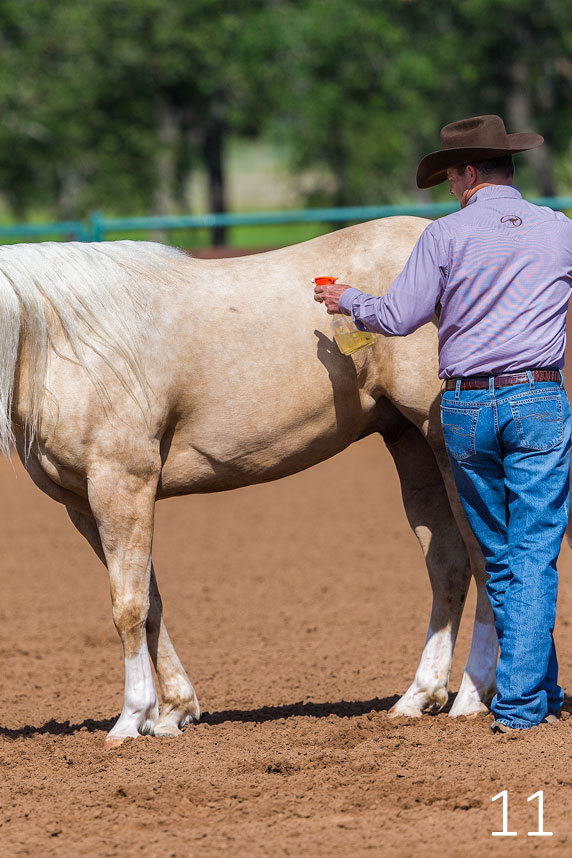